BASKETBALL
Ireland Off To A Great Start in Nicosia

Ireland’s Women’s Basketball Team, which includes Monasterevin’s Claire Melia (Glanmire) and Leixlip pair from Liffey Celtics, Sorcha Tiernan and Aine O’Connor, got off to a great start in the first Pool game in the European Championships for Small Countries in Nicosia yesterday when the defeated Andorra 104 – 33. 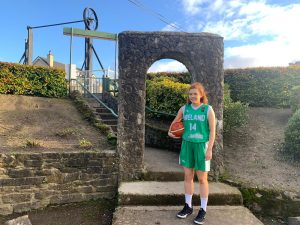 Monasterevin’s Claire Melia, one of the stars on the Ireland Women’s team in Nicosia on Tuesday

Ireland led 28 -12 after Quarter 1, 60 -18 at half time, 84 – 25 at the end of the third Quarter before finishing with the 71 point victory. Sorcha Tiernan scored nine of Ireland’s points, Claire Melia scored nine points and Aine O’Connor, four points in an all round good show from the girls in green.

Ireland face top seeds, Malta, in their next Pool game on Thursday afternoon.

Eadestown’s Tadhg Beirne has been included as a Replacement, by Coach Warren Gatland, on the Lions team to face the Springboks in the First Test. Many felt that the Kildare man deserved to start the game. Leinster have three players in the starting 15, Robbie Henshaw, Tadhg Furlong and Jack Conan, while one time captain, Conor Murray, is on the bench.

Confey qualified for the Final of the Senior League Division 1 with a comfortable win over Ardclough on Tuesday night. Confey got an early goal and had 1-1 on the board before Ardclough opened their account with a point. The winners added a second goal on nine minutes before Ardclough responded with a goal of their own a minute later to leave just two between them.

There was still two points between them at the break, 2-8 to 1-9, and the game looked to be anybody’s. Ardclough did pull it back to the bare minimum on a number occasions in the second half but a final flourish, which included a goal on the stroke of full time, ensured the victory went the way of the Cope Bridge side.

The Yeomantown Stud Irish EBF Stakes (Fillies’ and Mares’ Listed) at 5.20pm is the feature race in an eight race card in Naas on Wednesday with the first race off at 4.15pm. There is plenty of Kildare interest in the feature race with Jessica Harrington sending out the fancied Dickiedooda and Ken Condon saddling Teresa Mendoza and these two are expected to battle it out for the honours.

Halverstown 2 Makes It Through (as filed by Des Drumm)

The grounds at Harristown, in Brannockstown, looked so beautiful- freshly mown in the glorious sunshine-that the umpires appointed for the Adamstown Cup T20 semi-final on Saturday last said that the Halverstowncc.com website had not even done it justice in calling it an
“oasis”! The game itself was tense as well as steamily hot, but towards the end of it, against Adamstown coincidentally, it became clear that
Halverstown’s opponents were going fall short. Adamstown lost by 29 runs, failing to beat the solid 143run target set by the Kildare team.
Winning the toss, captain Des Drumm elected to bat. With just 8 runs on the board the first wicket fell. It took a steady innings by Sallins resident Abhi Pandey to settle the nerves. Indeed he was close to exhaustion when run out towards the end of innings having scored a magnificent 67. Manik Islam’s 20 was a good support as was 17 from Matt Ruddock, recently returned to the fold from abroad.

Arun bowled well for Adamstown, with 2 wickets for 25 runs, and also top scored with the bat with 36 not out. However, Halverstown’s fielding was close to brilliant: nothing got past them, with Matt, Mark Ronaldson and Stuart Conroy (also a busy Club Secretary!) particularly outstanding and Ahsan Syed and Abhi taking good catches. Prosperous’ own Cecil Johnston did well behind the stumps, also taking a catch. Paolo Rosa bowled impressively, taking 3 wickets for 14, with Ahsan and Sahab Uddin bagging a wicket apiece and Kevin Hodson a strong opening bowler. It was the complete team effort.

Next Sunday, 25 July, at 4pm Des Drumm will lead the team out against Terenure 4 in Corkagh Park in the Adamstown T20 Cup Final-the Club’s first Cup final appearance of any sort for two decades.

We Wish them luck!