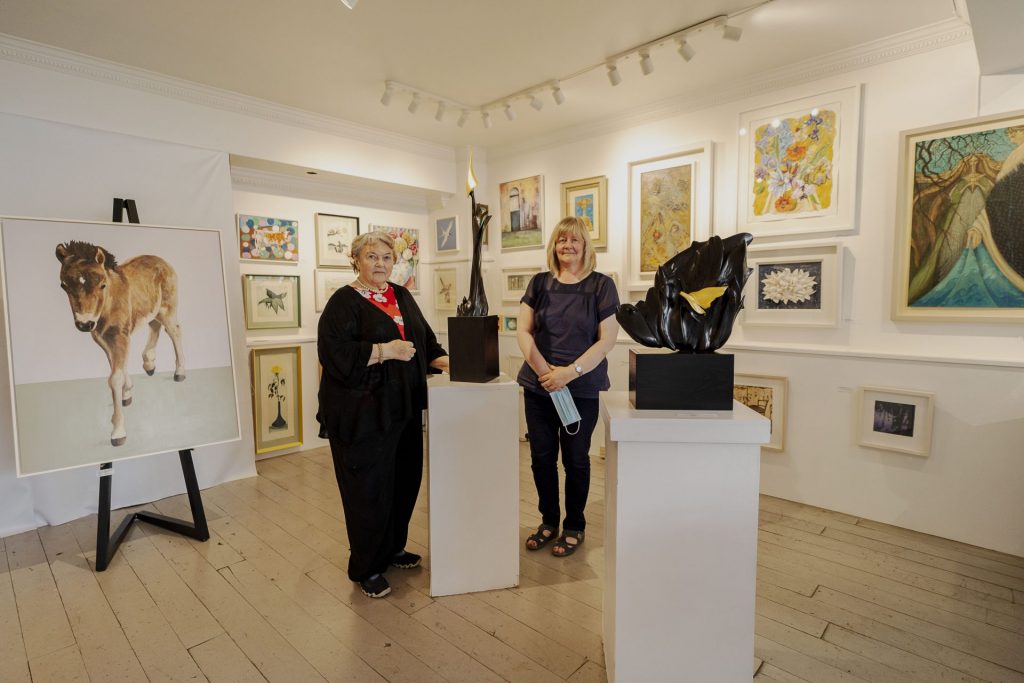 A talented group of artists are showcasing their work at the SULT Gallery, which you’ll find in Bolands on Market Square in Kildare town and which is well worth a visit.

Step inside the door and you find yourself in a cool, quiet space chock-full of artwork, beautiful pieces standing proud on plinths and adorning the white walls. There’s plenty here to catch the eye, no matter your taste, from original prints and ceramic creations to oil paintings and bog oak urns. It’s a space in which you could easily spend an hour admiring the fruits of the artists’ labour and perhaps choosing which one you’ll take home.

SULT (an Irish word meaning enjoyment, satisfaction and fun) was founded on 8 September last year and its website sultartists.com was launched on 15 October. It’s an exciting group of multidisciplinary Kildare artists who have come together in a collective manner to promote and market their work online, and the members include stained glass and ceramic artists, painters, printmakers and sculptors.

During the Covid restrictions, artists were able to continue working in their own studios but, with the lockdown, there were few available routes to market the resultant artwork. They recognised the power of a group of like-minded people and have been using their united energies to promote their art through the website as well as Facebook and Instagram.

One of those involved is Mary McGrath, who trained originally as an art conservator at the Courtauld Institute, London University and at the Fogg Art Museum, Harvard University. She’s worked in England, France, Italy and the US and, in Ireland, has worked for the Irish Museum of Modern Art, the Hugh Lane Gallery and the National Gallery of Ireland. Her CV includes lecturing to Art History students in Trinity College Dublin and project manager for the Francis Bacon Studio move from London to Dublin.

In 2017, Mary joined the Leinster Print Studio and has since exhibited prints at venues across Ireland and further afield; she paints and draws portraits and landscapes and takes on commissions for both in oils, charcoal and watercolours. Since beginning to create her own art, Mary has concentrated on her personal interest in biodiversity.

Mary was on duty in the gallery with Sylvia Hemmingway when I arrived one recent sunny Friday afternoon, over a month since they’d opened their doors. She explained that they’re there until the middle of September but are hopefully going to extend it to Culture Night which takes place on Friday 17 September.

Sylvia, for her part, studied Fine Art at the National College of Art & Design, Dublin, and works mainly in printmaking, painting and drawing. She has a Masters in Fine Art and a B.A.(Hons.) in Fine Art Printmaking and has won many awards for her work, including an Arts Council Travel & Training Award, a Wexford Co Council Artists Bursary Award and a Golden Fleece Merit Award.

She was a founding director of Blackstack Print Studio, Kilkenny from 2011 to 2020 and taught print in KCAT, Callan, Blackstack Studio, Leinster Print Studio and also in national schools in south Co Dublin through Rua Red Arts Centre.

I remarked that it must be nice to have a physical space to which people can come and Sylvia agreed, saying that “a lot of people have said that actually coming in, it’s lovely to have a place in Kildare where they can come in and physically see the stuff.” It certainly must be easier, seeing an artwork in person rather than on a screen, to imagine how it might look in its potential new home.

Mary said she thinks a lot of Kildare people will know Boland’s on the corner in Kildare. “It was one of the great pubs in Kildare and Mrs Boland was famous for her cooking… on market day, it’d be absolutely thronged with people coming in for lunch,” she said.

The pub would eventually close. Mary noted that “there was a push to try and make Kildare sort of [a] cultural hub for the county and one of the suggestions was that we would have an arts centre of some kind in Kildare. And last Christmas, Southwells across here on the corner – it used to be a supermarket and it closed – but the premises were available for Christmas and they did a pop-up shop and it was a huge success. And based on that, our group SULT decided to approach the county council to see was there any property in Kildare that we could try, you know, a gallery, because it hadn’t really been done in Kildare before.”

Mary said they approached various people, adding that “Suzanne Doyle is the local councillor and she spoke to Stephen Boland and between the two of them then they decided that maybe we could try this space.”

According to Mary, “everything was boxed out and painted white,” lights were sourced in IKEA, and they did a lot of the work themselves. “It looks like a very modern space,” she remarked. “It could hold its own with any gallery in Dublin, I think.”

She went on to say that they would love to raise the profile of art, remarking that “people are terrified of the word ‘art’… really what it is, is a reflection of people’s lives.”

And she said “I think it’s very good to see younger people coming in and going around and just liking the picture for what they see and not feeling they should appreciate some higher meaning or what not… I think the whole point of being here in a town centre… is to break down the sort of barrier between artists and visitor, you know, so that they can understand where the artists are coming from and it’s not all airy-fairy, but it actually comes from their life and their life experience and that sort of thing.”

The gallery is open daily from 11am-6pm Monday to Wednesday and 11am-7pm Thursday to Sunday. For more information about the group or to keep up to date with what they’re doing, visit sultartists.com or check them out on Facebook (@SULTArtists) and Instagram (sult.artists).