KILDARE Basketball trio of Claire Melia (Glanmire), Sorcha Tiernan and Aine O’Connor (both Liffey Celtics) once again starred on Thursday afternoon in another impressive display from Ireland today at the European Championship for Small Countries, as they defeated old-rivals Malta by 48-78. Ireland presented as an unstoppable combined force in today’s final group game against Malta, winning by 30 points to top the group and see them through to the semi finals on Saturday 24 July. 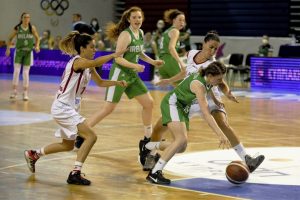 The jump ball was won once again by Rachel Huijsdens, however the opening minute was scoreless. The scoring was opened for Ireland in the second minute of play after an impressive steal from Edel Thornton on the Ireland D was fed up the court for a layup from Fiona O’Dwyer. Ireland’s second score came from a persistent Claire Melia, who scored the layup from an offensive rebound. A well-earned ‘and one’ from Dayna Finn put Ireland ahead by five later in the half, but impressive shooting from Malta with several 3-point shots from Kristy Galea and Samantha Maree Brincat kept them in the running. Gráinne Dwyer was particularly impressive in defense, with a steal and forced turnover through a backcourt violation. Fiona O’Dwyer rounded out the quarter with a pair of converted free throws to leave Ireland ahead by seven after the ten minutes was up.

Ireland were first off the blocks again in the second quarter, after O’Dwyer scored a layup assisted by Melia. The support play from Melia continued for the next score, after she assisted Claire Rockall with another layup. Melia continued to impress after she made a turnaround jump shot under pressure a couple of minutes later. Malta made their first basket after three minutes thanks to a layup from Claire Ciantar. A steal and a layup from Dayna Finn stood out as one of the best scores of the quarter. Áine O’Connor was introduced halfway through the quarter, and made her mark with a Rockall-assisted jumshot. More precision in their 3-point shooting from Stephanie De Martino and Christina Curmi kept the hope alive for Malta at this point, but O’Connor responded well with a good steal and assist for a Gráinne Dwyer layup. Malta’s Kristy Galea managed to score a dramatic 3-point shot at the buzzer to leave them with a 14-point deficit at half-time.

It was a slow start this quarter, with converted free-throws from Huijsdens and De Martino the only scores of the first half of the quarter. Melia was strong again for Ireland in the offense, pushing the attack and putting pressure on Malta’s defence. Tiernan caught a couple of defensive rebounds for Ireland, assisting Huijsdens and Melia at the other end of the court with layups. Ireland’s stamina and determination really showed through in the third quarter of the game, as their dogged defence resulted in just seven points being scored by Malta in the quarter. This was exemplified by Claire Rockall & Michelle Clarke who pressured hard on defence in the oppositions half, both diving on a spilt ball to earn a turnover late in the quarter. A jump shot from Malta’s Josephine Grima, brought about by a Sasha Lecuyer steal and Maria Bonett assist, was the final score of the quarer, but by this stage Ireland were ahead by 21 points.

Malta showed intent in the final quarter, scoring a hook shot in the opening play thanks to Grima, but a free throw from Melia and layup from Clarke, which incidentally came about from a Melia steal, set the tone once more for Ireland. Hannah Thornton made a steal late in the quarter to set up a Tiernan 3-point jump shot, with an Áine McKenna assist. McKenna then finished the game off in style when she stole the ball in the Ireland half, made the driving layup, drew a free, and made the ensuing free throw.

Although the effort from the whole Irish team could not be faulted in these 40 minutes, especially considering the whole team got their names on the scoreboard, it was Claire Melia who stood out with her performance. Melia recorded 13 rebounds, 4 assists, a steal and a block on top of the 19 points she scored. Ireland will face the second-placed team of Group B in the semi-finals this Saturday, which could be Cyprus, Kosovo or Luxembourg, depending on the result of Luxembourg v Cyprus.