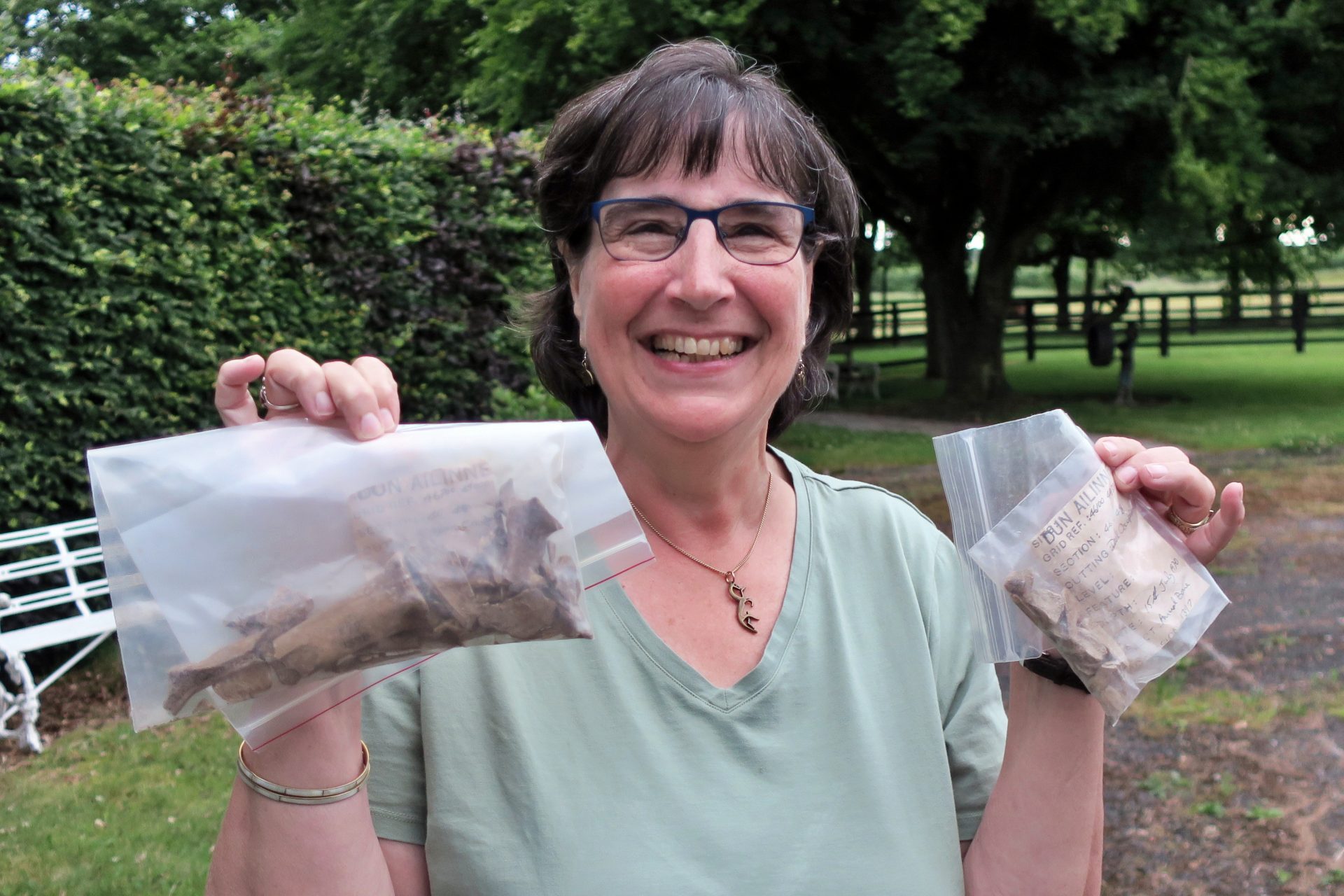 IN what was jokingly described as ‘CSI Kilcullen’, a group of American archaeology students working in Kilcullen spent a couple of evenings last week sorting through around 9,000 pieces of animal bones laid out on the floor of the home of one of their host families.

The bones had come from the Dun Ailinne Royal Site of Ireland outside Kilcullen, during archaeological excavations there in the early 1970s. When that project had been completed, the late Professor Bernard Wailes shipped them back to the University of Pennsylvania where he worked, among some 18,000 artefacts and other items which had been uncovered during the ‘dig’ over several summers. Now they are back in Kilcullen, on their way to the National Museum of Ireland at the end of this summer.

It should be stressed that the export of animal bone from the original excavation by Dr Bernard Wailes was licensed by the National Museum in accordance with the National Monuments Acts 1930-2014 lest anyone get the impression that the state would allow movement of Irish archaeological objects without control which is certainly not the case.

“They have to be the most travelled bones ever,” said Dr Susan Johnston from the Department of Anthropology at George Washington University, who is back on Dun Ailinne this summer after a hiatus last year due to the pandemic. Having collaborated with Professor Wailes on the publication of his findings in the early 2000s, she has been conducting further investigations on Dun Ailinne ever since. “It seems that Bernard didn’t actually have permission to ship the materials to Philadelphia, but he did so anyway,” she says. “When I got involved, I decided that they should all be brought back, because Ireland is where they should be.”

The animal bones found during those excavations during the late 1960s and early 1970s are believed to be remains from feasting during annual gatherings at Dun Ailinne, where the investigations have shown important activity on the hill from Neolithic and Bronze Age times through to after the arrival of Christianity from around 400AD. Susan Johnston thought she had returned all of the collection, but in 2015 was told that three more boxes of bone fragments had been found in the office of a colleague of Professor Wailes’s in Philadelphia.

“These were then shipped to Professor Pam Crabtree in New York University, who had done the original analysis on the bones. She decided not to do any more work on them, and brought them to her home in New Jersey. I collected them there and brought them to my home in Maryland, and later to the lab in George Washington University. From there they came back to my home, and I brought them back to Kilcullen this year.”

Laughing, she describes the sequence as starting with someone ‘eating a cow on Dun Ailinne and dumping the remains’, and from there the detritus was picked up and carried all the way across the Atlantic and back, locating in various places on the way. The reason for the ‘CSI’ exercise was to make sure that all the numbered fragments were sorted into their proper sequences before they will be sent to Dublin.

Meantime, Susan Johnston says that being back on Dun Ailinne for July with students is ‘amazing’. “In some ways, it seems like I was only away a week, but it is great to be here again. There’s something special about the community in Kilcullen and the support they give us.”

This year the trip, which is facilitated by Blackfriary Archaeology Field School in Meath, was a bit more complicated due to the pandemic. “We were all vaccinated, but we had to make arrangements to isolate here while waiting for the results of covid tests, which thankfully all worked out well.”

The Dun Ailinne site, which is currently under consideration for UNESCO World Heritage Tentative List acceptance as part of the Royal Sites of Ireland group, is on private land and is not accessible by the public. There is full information about it at the Dun Ailinne Interpretive Park in Kilcullen, which was developed by Kilcullen Community Action.