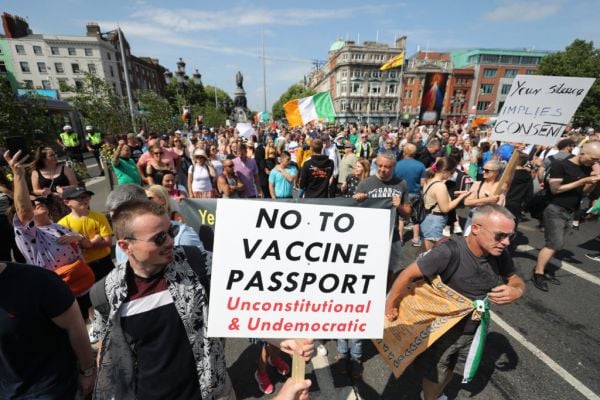 Far-right activists and anti-vaccine protesters have held a demonstration in Dublin against Covid-19 jabs and ongoing restrictions in Ireland.

Around 1,500 protesters gathered outside Custom House in Dublin, as roads were blocked and traffic forced to a standstill.

Protesters held anti-vaccine signs and chanted “freedom” as they walked through the city.

Others held placards with anti-lockdown messages, while others waved Irish flags, Irish county flags as well as American and Polish flags.

Protesters gathered at Custom House Quay before making their way along O’Connell Street and then to Government Buildings where a number of speeches took place.

Maskless demonstrators also spoke out against the Covid certs being rolled out for indoor dining and international travel.

A large Garda operation was in place throughout the city, which included public order unit vans as well as Garda prison vans on standby.

An anti-vaccine protester told the crowd: “If people are coming to your door then you have to protect yourself from the needle because it’s coming and they are coming for your kids.

“You have to stand up because it’s war.

“They are coming to kill you and that’s the end of it.”

The speaker also claimed the vaccine programme was “genocide”.

Among those taking part in the protest was prominent anti-lockdown campaigner Dolores Cahill.

Prof Cahill, a University College Dublin professor who ran as an independent candidate in the recent Dublin Bay South by-election, was seen taking selfies with a number of other demonstrators.

Hundreds of anti-lockdown and anti-vaccine protesters marched through the city centre.

The rally moved on to Botanic Gardens where a number of speeches took place.

The PSNI observed the event and maintained a low-key presence but made demonstrators aware they were taking part in an illegal protest.

Government at odds over ‘discrepancies’ in health spending