By Richard Commins
KILDARE  fell just short in the Electric Ireland Leinster Minor Football Championship semi-final against Dublin at Parnell Park this afternoon but having been second best for long periods the Lilywhites almost pulled off a smash and grab raid. 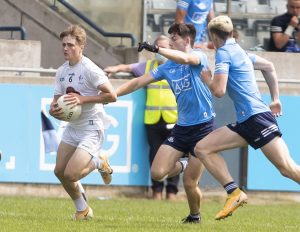 Kildare captain Daniel Lenehan slips past the Dublin defence to try and get the Kildare attack going Photo: Sean Brilly

While Dublin were worthy winners, they were given a huge fright by Cyril Kevlihan’s Kildare team who looked to have pulled off a miraculous win by turning a five-point deficit into a one-point lead between the 51st and 56th minutes. The Dubs looked rattled but they shot the last three points of the game to clinch a final date with Meath on the August Bank Holiday.

This wasn’t the crisp, high-scoring Kildare team we’d seen score ten goals against Longford and Carlow. Perhaps nerves played a part, but they committed far too many handling errors and found it hard to get any fluency in their kick-passing against a tight-marking, patient Dublin outfit.

Playing with a stiff enough breeze towards the Church end, Dublin eased into a four-point lead in the opening quarter, all their points coming from the boot of corner forward Tadhg Gorman, but Kildare came more into it after the water break. Gavin Thompson opened their account with a free on 22 minutes.

Five minutes later, Kildare were level, Fionn Cooke slotting the ball to the net after a long ball in from Thompson was quickly transferred on by Elliot Beirne. Dublin recovered from that shock though and scored six of the next seven points of the game between the 28th and 50th minutes to take what looked like an iron grip on the game, with Mark McNally and classy midfielder Ciarán Duggan weighing in with two each and only Beirne replying for Kildare.

To their credit, Kildare rallied late on. Patrick Mahoney sent a long ball into the Dublin goalmouth and when Thompson fed Beirne the Naas youngster slid the ball past Charlie Coghlan to give Kildare hope. Within five minutes they were ahead at 2-5 to 0-10 with Raheens man Thompson scoring a free from 30 metres and two fine points from play.

Perhaps that effort to get in front for the first time drained Kildare but Dublin, to their credit, regained their composure. Corner back Ronan Geoghegan marched forward and hit a great point with his left foot and Gorman edged the home team back in front on 58 minutes before substitute Karl Flynn secured a two-point win from a mark as the game edged towards injury team.

Kildare needed a goal but it wasn’t forthcoming as a solid if unspectacular Dublin secured their place in the final.