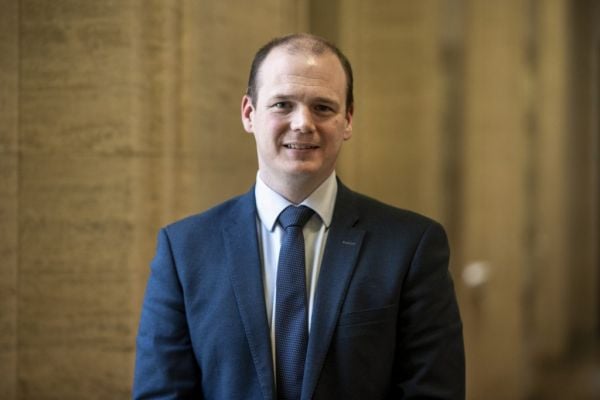 The North’s Economy Minister has rejected a suggestion from Stormont Health Minister Robin Swann that only people who are double-vaccinated could be allowed to cash in on a high street voucher scheme.

Mr Swann said he would be interested in bringing the idea to the Northern Ireland Executive as an incentive to persuade more people to get jabbed.

But a spokesperson for the Economy Minister Gordon Lyons has rejected the idea, stating it could “jeopardise the entire scheme”.

A retail group has also described the idea as a “non-runner”.

A number of hospitals in the North are struggling to cope with a surge in Covid-19 admissions, and the Belfast Trust has said that 60 per cent of people admitted to hospitals in its area have not been vaccinated.

The scheme would see individuals issued with pre-paid cards of a value of up to £100 (€117), which could be used in shops, but not online.

Mr Swann was asked about linking the voucher scheme with the vaccination programme during an appearance on the BBC Nolan Show.

He said: “It is something I will have the discussion about and raise with the Executive committee certainly, in regards to an incentive for people to come forward and get vaccinated.

“But it would also have to be retrospective because I wouldn’t want to discourage anyone who has already been vaccinated.”

A spokesperson for the Department for the Economy responded: “The Economy Minister (Gordon Lyons) does not support making the high street scheme conditional on individuals being fully vaccinated.

“Such a suggestion would create unnecessary bureaucracy, throws up a range of legal issues and could ultimately jeopardise the entire scheme.

“As previously announced by the Department for the Economy, and backed by the Executive, every person in Northern Ireland aged 18 and over will be eligible to apply for a pre-paid card worth £100 to spend in supporting local businesses.”

Retail NI chief executive Glyn Roberts added: “I understand where Minister Swann is coming from and fully agree with him on the need to increase the numbers of those getting both vaccines, but he is wrong to link this to the high street voucher.

“It is a non-runner.

“This scheme is about supporting struggling independent retailers, the regeneration of our high streets and boosting our shattered economy. It’s not about vaccine take-up and should not be linked in this confusing way.

“Who would actually enforce this? Would it be the Department of Health or the shop owner?”

Mr Roberts added: “This voucher has already been significantly delayed and we now need to focus on getting it out to shoppers and avoid any further unnecessary distractions.”

Meanwhile, the promoter behind the Belsonic and Custom House Square concerts in Belfast has said attendees will have to show proof of their Covid status.

Tom Jones, Kodaline, Nile Rodgers and Chic and Scooter are some of the acts scheduled to appear at the Custom House Square gigs in August, while Liam Gallagher, Gerry Cinnamon and Dermot Kennedy are set to appear at Belsonic in September.

Promoter Joe Dougan said ticket-holders would have to prove their Covid status one of three ways – proof of having had both doses of the vaccine, proof of a negative Covid test 48 hours before arrival or proof of natural Covid antibodies.

Mr Dougan told the BBC: “It started with the events research programme in England, which was designed to speak to the viability and safety of large events.

“The findings of that programme was that this entry criteria was lower risk for attendees and acts and workers as well. This is something which is very much standard and we thought it was the responsible thing to do to have this at our concerts too.”

He added: “There has been a little bit of adverse reaction on social media, it is understandable because this is a new message to be putting out there.

“You can show proof of double vaccination, either through your card or the new passport system.

“But you can also provide a negative lateral flow test, or alternatively, if you have had coronavirus in the last six months and you have a positive PCR to show that, that shows you have natural immunity to the virus so that can also be used for entry.

“So, it is one of those three. If you don’t have a vaccination there are other options to gain admission.”