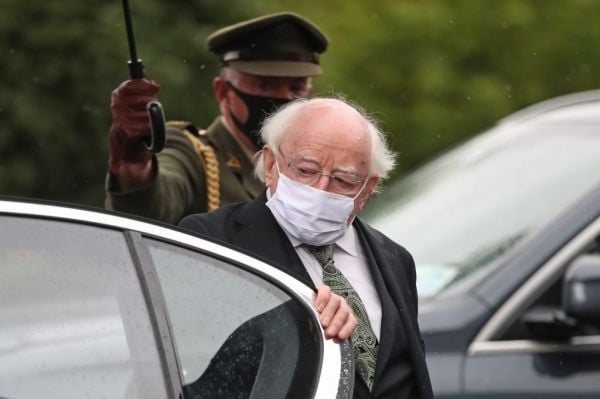 The President’s concerns about the amount of legislation sent to his office are “legitimate”, the Taoiseach has said.

Michael D Higgins has flagged concerns about the volume of legislation sent to his office.

Speaking after a meeting of the North South Ministerial Council, Micheál Martin said: “If the President is of the view that the volume of legislation that arrives, it’s such a high volume in a very short space of time, I think there are legitimate issues there to be articulated and to be discussed.”

Mr Martin said that some problems had partially been caused by the pandemic, saying the issue should be considered “in the context of Covid.”

He added that the end of any Dáil session always brings attempts to complete the passage of legislation.

“Covid has without question exacerbated that in terms of reducing the number of days that the Dáil and the Seanad could meet,” he said.

“So I know that that’s been a contributing factor to the situation that has been articulated within the president’s correspondence.”

Labour TD Duncan Smith said: “I welcome the President’s intervention and look forward to discussing this in detail tomorrow.”

Social Democrats TD Cian O’Callaghan said: “It really shouldn’t take an intervention from the president for the Government to realise that ramming through legislation at the last minute, using the guillotine, not allowing time for debate, scrutiny and amendments is no way to treat the democratic process.”

In a letter to the Oireachtas, Mr Higgins referenced the large volume of complex legislation he has had to consider in recent weeks.

He specifically referred to legislation he had to consider in the weeks leading up to Christmas as well as in recent weeks, and said nine pieces of legislation were sent to his office in one day.

As set out in the constitution, the President must consider new legislation before signing it into law.

Under Article 26 of the constitution, Mr Higgins can refer legislation to the Supreme Court within seven days of receiving it, to determine whether the Bill conflicts with the constitution.

The President must convene with the Council of State when doing so. If the Supreme Court holds that the Bill is unconstitutional, the President cannot sign it.

If the court rules it is constitutional, the President signs the Bill and it becomes law and it cannot be challenged at a later date.