DESPITE a serious contender for Goal of the Season from Man of the Match, Daniel Flynn, Kildare’s wait for a 14th Leinster title moves from 21 to 22 years now as they were unable to build on a promising first half, Flynn’s goal and the injection of the younger blood and Dublin ran out deserving winners. 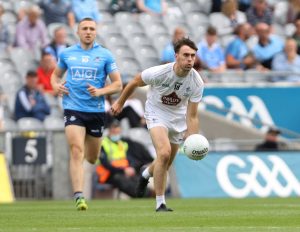 Darragh Malone sets up a Kildare attach in the Leinster Final against Dublin in Croke Park Photo: Sean Brilly

Each team made changes before the throw-in with Darragh Malone and Shea Ryan coming in for Eoin Doyle and Alex Beirne while Dublin included John Small from the start.

The sides were level on three occasions in the first eleven minutes with Jimmy Hyland (0-2) and Daniel Flynn scoring for Kildare and Dean Rock (0-2) and Ciaran Kilkenny responding for the defending champions.

Kildare played well within themselves in the opening half, and in particular up to the Water Break, and were just a point off the pace following Jimmy Hyland’s third point of the game. Dublin went on to out score Kildare 0-3 to 0-1 before half time with Jimmy Hyland kicking his fourth point of the afternoon, an excellent long range effort, and the defending champions went in four points up at the break, 0-9 to 0-5, Dean Rock accounting for four of Dublin’s points at that stage.

About four of Kildare’s efforts fell short into the grateful arms of Evan Comerford in that opening half.

In their previous games, against Meath (League), Offaly and Westmeath, Kildare turned the screw in the third quarter and when Daniel Flynn popped over a point a minute after the restart it looked as if the Lilywhites might kick on from that point. Alas that was as close as Kildare got to Dublin, three points. Dublin once again outscored Kildare, this time 0-6 to 0-2 up to the second half Water Break with Niall Scully and Ciaran Kilkenny among the Dublin scorers. Neil Flynn and substitute, Alex Beirne, were the Kildare scorers in the period.

Jack O’Connor then gave youth a further fling around the hour mark with Darragh Kirwan, Brian McLoughlin and Shane O’Sullivan all getting game time. Daniel Flynn’s wonder goal should have given Kildare the impetus to push on but instead it was Dublin who “managed” the game out adding four more points to one reply from McLoughlin for Kildare.