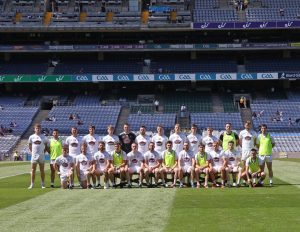 All of that will be brought to bear when Monaghan Referee, Martin McNally, throws the ball in at 4pm to start the Leinster Final of 2021 with Dublin, six times in a row All Ireland Champions, going for their 60th title, their 11th in a row, while Kildare will be looking to capture just their 14th title, their first since 2000 when the beat Dublin in a replay.

Kildare, newly promoted to Division 1 just a couple of months ago, are in the Leinster Final by virtue of victories over Offaly and Westmeath while Dublin accounted for Wexford and Meath in earlier rounds.

This Leinster Final, in fact the entire Leinster Championship, has failed to capture the public attention in either county, in the Province or indeed the country at large, which must be of great concern to Leinster Chairman, Pat Teehan and his Committee. Pundits everywhere have written off Kildare completely and have been talking up a Dublin/Mayo All Ireland semi-final for some time now. I’m sure the Kildare dressing room wall will be plastered with such utterances for Sunday’s Final!

But such “encouragement and motivation” should not be needed for this Kildare team. Surely an opportunity to win a Leinster title, the first since 2000, and in the process dethrone the seven in a row All Ireland chasing Dubs should be motivation for any team or player.

Kildare, of course, are at their best when no one gives them a chance, the opposite pertains when they are favourites! Jack O’Connor is a very experienced manager with three All Ireland titles to his name at senior level as well as a few more at minor and U21 level and he has surrounded himself with a Management team of Tom Cribbin, Bryan Murphy and Emmet McDonnell, all of whom have vast experience at managing teams, particularly at county level.

In the Blue corner the likes of Dessie Farrell, Darren Daly and Mick Galvin have won playing at the highest level and are looking to continue doing so at managerial level after capturing the 2020 Leinster an All Ireland crowns in 2020.

For a team that has lost Stephen Cluxton, Michael Darragh MacAuley, Denis Bastick, Cian O’Sullivan, Jack McCaffrey, Eric Lowndes, the Brogans and with Kevin McManamon, in Tokyo with the Irish boxers, and to still be favourites for the Leinster and All Ireland titles is some achievement.

For their part for Kildare to lose Peter Kelly, Tommy Moolick, Keith Cribbin, Johnny Byrne (both to hurling) as well as Paul Cribbin and now Kevin Feely and possibly Eoin Doyle to injury, and to still gain promotion to Division 1 and reach a Leinster Final shows the quality of the players now at Jack O’s disposal.

Sure they are up against it in the Leinster Final, as indeed all other counties are when they face the Dubs,  but Kildare are not travelling to Croke Park to lose or to just make up the numbers O’Connor defiantly told us after the semi-final. And that’s as it should be.

Kildare have competed well, and in many cases, won, against Dublin at underage level in the past,  so why should the senior team be any different. There is one proviso though, Kildare cannot just turn up for the third quarter, give a great display and then fade out in the final quarter. Three games in a row was enough to do that.

The Leinster Final will require a “full on approach” for the entire 70 plus minutes and only when Referee McNally blows the final whistle can the Lilywhites take the foot of the pedal. The absence of Cluxton and a packed Hill are pluses for Kildare but a water-tight defence, powerful midfield and an on -song forward line are all vital if Kildare are to advance to meet Mayo. There we said it, Kildare to meet Mayo.

Kildare got their hands on the Delaney Cup on 13 occasions so far; we wish Jack, David and all the team the Very Best of Luck in pursuit of title No 14. Believe!