KELLIE Harrington, the 31 year old boxer from Portland Row in Dublin, with connections in Kill and Caragh in Kildare, has won gold in Tokyo after a stunning performance in defeating Brazil’s Beatriz Ferreira, in the Women’s Light Final early on Sunday morning. 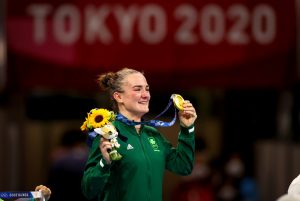 Although losing Round 1 to her opponent from Brazil, who hadn’t been beaten in two years, Harrington fought back with precision and composure to take an unanimous decision in the end.

Boxing continues to be Ireland’s most successful Olympic sport.