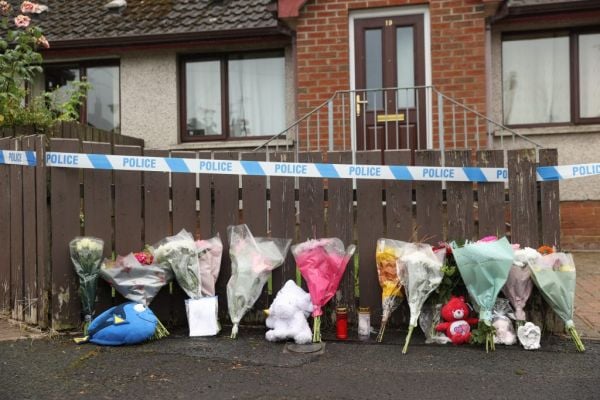 Police in the North investigating the murder of a two-year-old girl have arrested a 24-year-old woman.

Detectives from the PSNI’s major investigation team arrested the woman on suspicion of perverting the course of justice, causing or permitting the death of a child and child cruelty.

The woman remains in custody at this time.

It comes as police were given extra time to question a man arrested on suspicion of the toddler’s death.

The child, named as Ali Jayden Maguire, died in hospital on Friday after sustaining head injuries at a house in Co Tyrone.

Detectives from the PSNI’s major investigation team were given an additional 36 hours to question the 32-year-old man.

He was arrested hours after the toddler, known as AJ, was taken to hospital from a house in Park Avenue in Dungannon.

The toddler’s mother is originally from Dublin and recently to moved to the area.

Detectives from Police Service of Northern Ireland’s Major Investigation Team, investigating the circumstances of the death of a two-year-old girl on Friday, 6 August, have arrested a 24-year-old woman. pic.twitter.com/rwVMbU0uJS

Friends and family left ornaments and teddy bears alongside sympathy messages, flowers and cards outside the home where AJ was discovered seriously injured.

In a statement, the PSNI said: “Detectives from Police Service of Northern Ireland’s major investigation team investigating the circumstances of the death of a two-year-old girl on Friday August 6 have been granted a court extension for an additional 36 hours to question a 32-year-old man arrested on suspicion of murder.”

The victim’s aunt Cuirnan, who did not reveal her surname, thanked the public for their messages of sympathy in recent days via a Facebook post.

Forensic officers and the PSNI remained at the scene of Sunday morning.

Former DUP leader and MLA for Fermanagh and South Tyrone Arlene Foster tweeted: “Another tragic death in the constituency, this time a little girl.

“Thinking of all those dealing with this awful event, and trying to make sense of it all.”