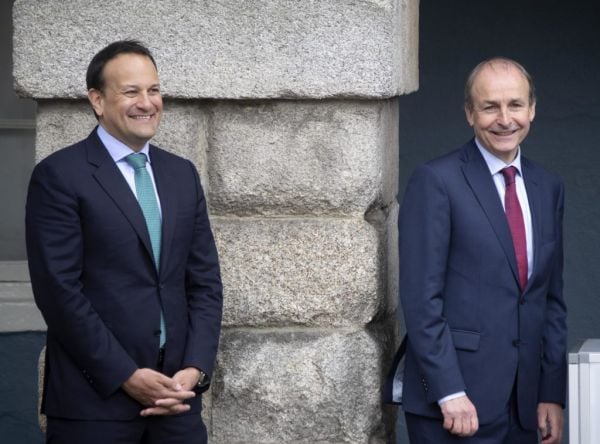 Fianna Fáil TDs are being contacted by members who are angry that the party has not condemned Leo Varadkar’s attendance at a private outdoor party while public health messaging said to avoid crowds.

In a statement on Tuesday Ógra Fianna Fáil said it was “deeply concerned” after Mr Varadkar attended an event organised by former children’s minister Katherine Zappone at the Merrion Hotel in July.

Despite the statement from the party’s youth wing, senior members of Fianna Fáil have backed Mr Varadkar.

Taoiseach Micheál Martin has accepted Mr Varadkar’s explanation of his attendance at the event.

However, Fianna Fáil TDs have been contacted by grassroots members of the party who are unhappy with this stance.

In response to a question from the Irish Examiner on Ógra Fianna Fáil’s statement, one TD said: “They’ve asked the wrong man to resign.”

“TDs have people calling them from other counties asking when are you going to take a stand against Fine Gael,” the TD added.

“Ógra are just reflecting what the grassroots are saying and that’s what they are saying. It’s extraordinary seeing the Taoiseach and others coming to defend Leo when he wasn’t prepared to defend (Barry) Cowen or Dara (Calleary), and those who were sacked.”

Another TD told the Irish Examiner that the support for Mr Varadkar is “peeving people” as Dara Calleary had to resign from Cabinet over his attendance at the infamous Oireachtas Golf Society dinner.

“There’s a mixed view, but we all are looking at this at how Dara (Calleary) was treated. Even Leo Varadkar’s owns senators lost the whip over the last summer. It needs to be sauce for the goose, sauce for the gander.

“Either there is equal punishment for Oireachtas members, or we say last year’s action was too harsh a punishment.”