A newsagents in a south Dublin town has been revealed as the location where a EuroMillions ticket worth over €1 million was bought for last Friday’s draw.

The National Lottery is calling on EuroMillions players in Blackrock in Co Dublin and its surrounding areas to check their tickets after it confirmed that the Spar store in Woodbine Park in Black rock was where Friday’s €1 million ‘Ireland Only Raffle’ was sold.

The ‘Ireland Only Raffle’ winning raffle code from Friday’s EuroMillions draw, which is worth €1,005,000 to one lucky Dublin player is: I LLD 48404.

Owner of the winning store, Aidan Cronnelly was ecstatic when he learned of his customers big win.

“We are absolutely thrilled. The shop itself is a local community store, and we know each and every customer by name so we’re 99 per cent sure that the win is from the local community which makes it even more satisfying. We have been in business in the shop for over 22 years and this is our first big lottery win, so we’re going to enjoy the celebrations on behalf of our lucky customer.”

The popular local store owner has also moved to quell any rumours in the locality that he is in fact the winning ticket holder.

“Incidentally, I am on holidays in Portugal with my family, so I can’t be part of the celebrations in the store! I’m sure my absence will be noted in the community, but I can guarantee that I haven’t taken the loot and run!”

“We are genuinely thrilled for the winner, whoever they may be, and we wish them every ounce of luck with their big prize,” he added. 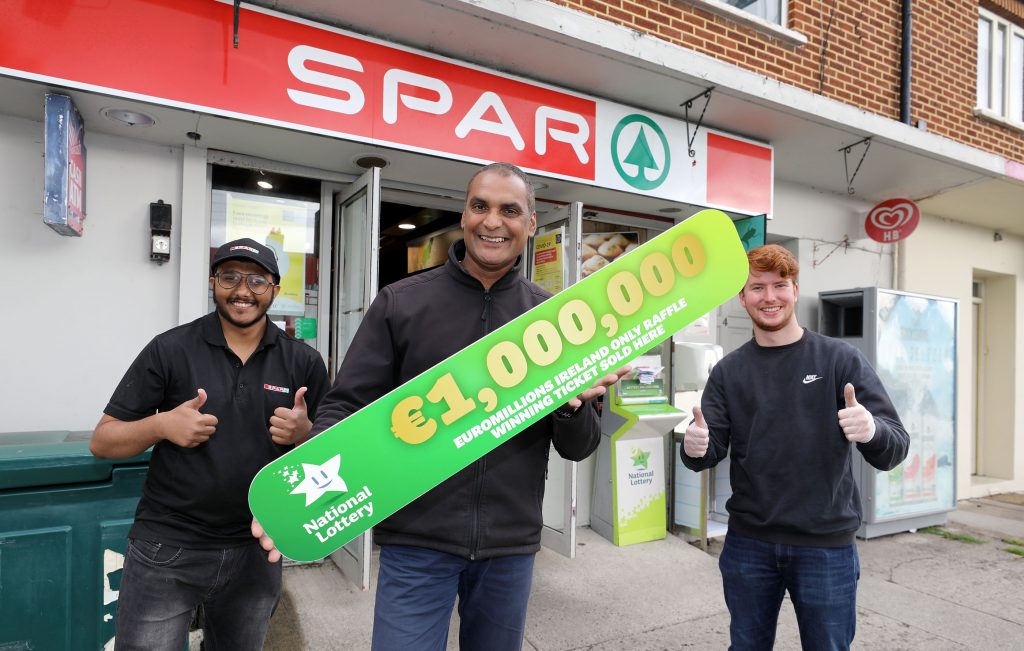 Staff at the Spar store in Woodbine Park in Blackrock, Co. Dublin celebrate after it was announced they sold last Friday’s winnning ‘Ireland Only Raffle’ prize of €1 million.

Last night’s EuroMillions draw was the second draw in the eagerly anticipated ‘Ireland Only Raffle’ special event which guarantees to make five new millionaires in Ireland over two weeks. Another millionaire will be made this Tuesday, August 17th.

Meanwhile, there was no winner of Saturday night’s €10,337,475 Lotto draw which saw three players win the Match 5 + Bonus prize, coming agonisingly close to scooping the mega prize. The three winners who each win the consolation prize of €22,332 were from Cork, Meath with another player from Limerick who played online.

While there was no winner of the Lotto jackpot prize of over €10.3 million, over 123,000 players won prizes. Next Wednesday’s Lotto jackpot now rolls to €11 million (estimated).