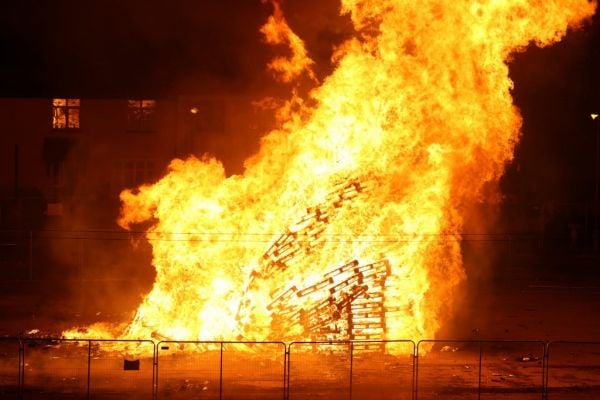 The placing of a banner bearing the name of a murdered police officer on a republican bonfire in Northern Ireland has been branded “disgraceful” by DUP leader Jeffrey Donaldson.

Mr Donaldson called for widespread condemnation of the action which he described as a “hate crime”.

The name of Constable Ronan Kerr, who was murdered by dissident republicans in Omagh in 2011, was clearly visible on the side of a pyre in the Bogside area of Derry on Sunday evening.

Threats to other named individuals were also displayed.

Mr Donaldson told the BBC: “I must say it is very worrying and I hope that we will hear widespread condemnation of this.

“I spoke out very clearly when it came to bonfires around the Twelfth and said that it was wrong to engage in this kind of activity. I encouraged people not to desecrate flags and posters and symbols.

“Putting the name of a murdered PSNI officer, Ronan Kerr, on a bonfire and thinking of the harm, the hurt and the pain that causes to his family, it is absolutely dreadful.

“I would say to the police that we must have the lowest tolerance level of this kind of behaviour and I hope the police will seek to identify the people who have done that.

“It is a hate crime, it is a criminal offence and therefore it should not be tolerated, this kind of behaviour is disgraceful.”

Union flags, Israeli flags and British military insignia, including that of the Parachute Regiment, were also tied to the fire before it was lit late on Sunday night.

Members of the Parachute Regiment shot dead 13 civil rights demonstrators on Bloody Sunday in Derry in 1972.

Similar flags and emblems were displayed on another bonfire in the Galliagh area on Sunday.

Bonfires are traditionally lit in nationalist areas of the city on August 15th to mark the Catholic Feast of the Assumption.

The fires are also associated with the August anniversary of the introduction of internment without trial during the Troubles, and this year the bonfire building happened on the same weekend that unionists and loyalists participated in the annual Apprentice Boys Relief of Derry commemorations.

Republican and loyalist bonfires continue to be a source of controversy in Northern Ireland.

Bonfire builders from both communities have provoked anger in the past by burning symbols associated with the other’s culture.

The PSNI said it was aware of a banner on the Bogside bonfire that was making threats to police officers and a member of the public.

Chief Superintendent Darrin Jones said: “The display of this material has been perceived as both offensive and distasteful.

“An evidence-gathering operation was in place during this incident and we will now review this to establish if any offences occurred. If any offences are detected, a full police investigation will be carried out.”

He urged anyone with information to come forward.