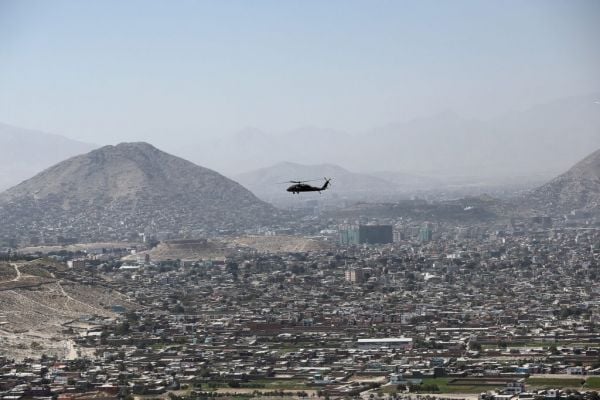 A retired senior member of the Defence Forces who helped train Afghan security forces has accused the US and Nato of abandoning the country’s people.

Lieutenant Colonel Ray Lane, a veteran of the Explosive Ordnance Disposal squad and a former commander of the Army Ordnance School, said the treatment of Afghans has been “outrageous”.

He made the comments after the Taliban seized power in Afghanistan, two weeks before the US was set to complete its troop withdrawal.

During his time in Afghanistan in 2002 and 2009, Lt Col Lane was appointed chief operations officer of the Counter Improvised Explosive Device Branch.

He told the PA news agency the Biden administration had made a “complete mess” over the decision to pull its military out of the country.

“Nato and America have walked away from those people as if they don’t exist. I think it’s outrageous,” he added.

“I was given an award by the Americans in Afghanistan, but I feel like giving that back to the American embassy now.

“Isn’t it amazing how the legendary American intelligence-gathering machine failed to predict the Taliban would take over Afghanistan in two weeks?

“It’s incredible that an organisation like the Americans could get that so wrong.

“They made a complete mess of it and talking about it upsets me.

“If this is his (Joe Biden’s) legacy, I would like to see what the downside is. He is after exposing a significant amount of people to the wrath of the Taliban.

“It might take a few weeks or months before we see the full force of their brutality.”

Lt Col Lane said he is not shocked at how quickly the Taliban took over the the capital, Kabul.

He said the insurgent group built its capability under the eyes of Nato.

“Now they have gone, the Taliban have free rein now all over Afghanistan,” he added.

“I wore the Nato logo in Afghanistan with pride but it’s gone now. Ireland should have nothing to do with it.

“They promised people they would bring a standard of living and democracy and health and education and they have failed, sadly.”

Lt Col Lane first travelled to Afghanistan a year after the US-led invasion in 2001.

“Life out there at that time meant we could go to restaurants every night and mix with the Afghan people in uniform and get on great with them,” he added.

“Then Nato came in and when I went back in 2009, we had to camouflage our faces, weapons ready to fire, with absolutely no connection with the local people.

“The good side is that I was aware of the progress being made for children and women and the hospitals, and I was involved myself in training the Afghan army in certain aspects.

“That seemed to be going reasonably well. The last thing I expected was for the Americans to make a decision to pull out and when I heard that, I was absolutely horrified.

“It’s a dangerous country and when I went there I was always concerned about safety, but I believed we were doing the right thing.

“I found we were making a difference, we had specific jobs in relation to improvised explosive devices, and protecting our own troops and the local people.

“We had a plan on how we would get through to local people and to me it wasn’t perfect, by any means, but it was a lot better than what it had been like for some of the people.”