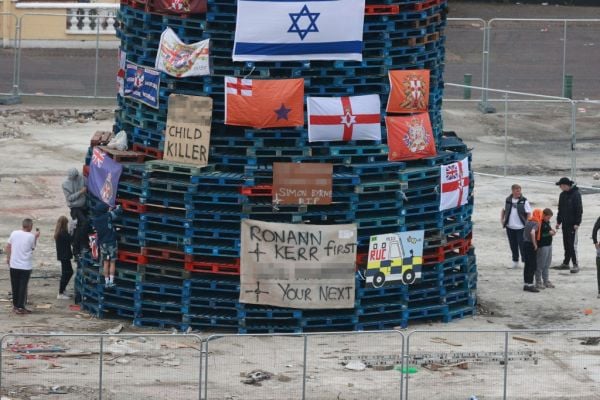 Poppy wreaths and a banner carrying the name of a murdered police officer were among items placed on contentious republican bonfires in Northern Ireland, ahead of them being lit on Sunday night.

The name of constable Ronan Kerr, who was murdered by dissident republicans in Omagh in 2011, was clearly visible on the side of a pyre in the Bogside area of Derry on Sunday evening.

Threats to other named individuals were also displayed.

Union flags, Israeli flags and British military insignia, including that of the Parachute Regiment, were also tied to the fire prior to it being lit late on Sunday night.

Members of the Parachute Regiment were responsible for shooting dead 13 civil rights demonstrators on Bloody Sunday in Derry in 1972.

Similar flags and emblems were displayed on another bonfire in Derry’s Galliagh area on Sunday.

Bonfires are traditionally lit in nationalist areas of Derry on August 15th to mark the Catholic Feast of the Assumption.

The fires are also associated with the August anniversary of the introduction of internment without trial during the Troubles and this year the bonfire building happened on the same weekend that unionists and loyalists participated in the annual Apprentice Boys Relief of Derry commemorations.

Republican and loyalist bonfires continue to be a source of controversy in Northern Ireland.

Bonfire builders from both communities have provoked anger in the past by burning symbols associated with the other’s culture on their fires.

The PSNI said it was aware of a banner on the Bogside bonfire that was making threats towards police officers and a member of the public.

Chief Superintendent Darrin Jones said: “The display of this material has been perceived as both offensive and distasteful.

“An evidence-gathering operation was in place during this incident and we will now review this to establish if any offences occurred. If any offences are detected, a full police investigation will be carried out.”

He urged anyone with information to come forward.

“As a society we must never become desensitised to displays of hatred, and intolerance,” he tweeted.

“The clear motive behind this display is to cause further hurt and offence upon those who have already suffered so much.”