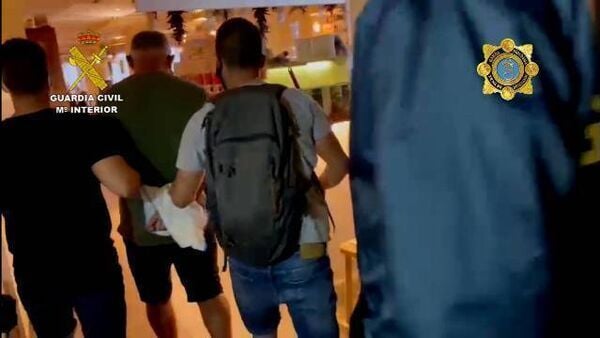 Police in Spain have released video footage of the moment Gerard Hutch, known as ‘The Monk’, was arrested in Spain last week.

The 58-year-old fugitive was held on a European Arrest Warrant issued in relation to the attack on the Regency Hotel in north Dublin in 2016, in which Kinahan gang member David Byrne was shot dead.

Garda members were at the scene when Hutch was arrested inside a restaurant in Fuengirola, a town on the Costa del Sol.

The video footage shows a number of Civil Guards approach Hutch, who is sitting at a table with an unidentified woman.

He is seen holding a menu and wearing a face mask.

Police in Spain described Hutch as the “most dangerous criminal”, who is wanted in Ireland on a murder charge.

They said the Civil Guard’s central operational unit first began to look for Hutch in the Canary Islands where they lost track of him in April of this year.

Investigators received intelligence that he had moved to southern Spain and was located in a house in the town centre of Fuengirola.

They said they set up a discreet surveillance operation on the house and that it appeared Hutch had his own “logistics network” which meant he didn’t have to leave his “hiding place”.

Last Thursday, a surveillance team saw Hutch leave the house and walk through the town centre.

“He leaves his home walking through the busy streets of the centre of the city,” police said in a statement.

“(He is) very focused on his safety, making numerous stops and (direction) changes, until he accesses a well-known restaurant, where he is detained by Guardia Civil agents, carrying false documentation at that time.”

Hutch was filmed being approached by armed Spanish officers and a garda who then escort him to a bathroom in the restaurant where his belongings are searched.

Spanish police said he was found with false documents.

After he was detained, the Guardia Civil searched his house following a request by gardai.

Hutch made a brief court appearance at the weekend in Spain but did not apply for bail.

The investigation was carried out by the Justice Fleeing Team of the Civil Guard’s central operational unit, in collaboration with An Garda Siochana and Europol, as well as the Rapid Action Group.

Mr Byrne was shot dead by members of the Hutch gang at a boxing weigh-in on February 5th, 2016.

Gardaí have always believed the intended target was crime boss Daniel Kinahan, who in recent times has attempted to re-brand himself as a boxing promoter.

The violent shooting at the north Dublin hotel sparked a bloody gang war that claimed 18 lives.

Aircraft with cocaine worth €8.4 million believed to have travelled to France and Belgium