Maynooth Secure First Ever Minor A Hurling Title in Style

THE 2020 GAA Season finally drew to a close on Thursday evening at the Kildare GAA Centre of Excellence at Hawkfield with the Haven Hire Minor ‘A’ Hurling Championship Final between Maynooth and Naas. Both teams were waiting a very long time for the COVID-19 delayed fixture, 10 months had passed since both teams qualified for the final, Naas kept themselves sharp by participating in the 2021 Kilkenny Minor League while some of the Maynooth team were recently involved in the 2020 Junior and Intermediate Finals. 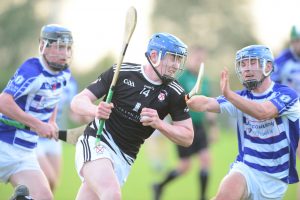 Action from the 2020 Minor A Hurling Final Photo: Martin Rowe

These two teams have been generally the strongest at this age bracket, having competed in the majority of finals as they both progressed up
through the juvenile ranks and it was no surprise to see them reach the 2020 decider in a repeat of the 2019 final where Naas were victorious with a six point winning margin.

Recent history and tradition very much favoured the Naas side as they were pursuing their 7th title in eight years whereas Maynooth never won the title in their own right; it is believed that they were part an amalgamation with Kilcock that lifted the title in 1965, 56 years ago.

Within two minutes it was Naas corner forward, Killian Harrington, that opened the scoring with a point from play, only for midfielder Ciaran Flanagan to open Maynooth’s account a minute later with a point of his own. The sides then traded frees with Alan Tobin pointing a long range effort from well inside his own half in the 9th minute, but David Qualter responded with a point of his own a minute after, following good work by Cathal O’Donovan to win a free.

Kildare Senior Hurler Cathal McCabe then put the North Kildare side ahead for the first time with a pointed effort and David Qualter quickly doubled the lead with another placed ball after Luke Kosinski was fouled. Naas then responded perfectly, Killian Harrington firstly pointed a free and then Charlie Sheridan had a chance for a point but was hooked by Daniel O’Meara and the shot fell short only to drop perfectly into the hand of Harrington who quickly dispatched the sliotar into the Maynooth net to send Naas in to the first water break with a lead of 1-4 to 0-4.

Following the resumption of play the sides matched each other score for score for the next ten minutes, firstly David Qualter pointed a free and then Naas responded with points from wing back Cian Boran and corner forward Sheridan to give Naas a four point lead. McCabe pointed from play for Maynooth and David Qualter proved his accuracy again from placed balls with another pointed effort to reduce the deficit to two, only for the County Town side to stretch it again to four (1-8 to 0-7) in the 25th minute with efforts from Ferran O’Sullivan
and midfielder Matthew Whelan.

The five minutes before half time proved to be a crucial time as the Maynooth side started to convert the chances that earlier in the half they had missed. They scored four unanswered points, two from midfielder Eoin Kelleher in quick succession and then two pointed frees from Qualter to send the sides in level at half time on a scoreline of 0-11 to 1-8.

David Qualter started the second half where he left off the first when he pointed from a free in the fourth minute to put Maynooth ahead. Once the Crom Abú side got their noses in front they never looked back and put in a powerful second half display. Gearoid Hogan, the Maynooth net minder, pulled off a great save from Naas centre forward Seamus Kelleher to repel another Naas attack and Qualter followed up with his 8th pointed free on the 40th minute; Naas responded with a point of their own a minute later but Ciaran Flanagan cancelled that out with a great point from a very acute angle.

At the second water break the Maynooth side led by 2 points, 0-14 to 1-9. David Qualter pointed from play with a long range effort from midfield just after the restart and on the 50th minute, the decisive moment of the match, Adam Jordan shot past Naas keeper, Ben Loughlin, after receiving a great pass from Cormac Nolan. This put six between the sides and Maynooth looked fully in control of the tie and never looked back from that point.

David Qualter, in the last five minutes added four further points, two from play and two from frees to bring his personal tally for the night
to an impressive thirteen points. When Killian Jones blew for full time Maynooth made history by securing their first ever Minor A County Championship Hurling title and were deserving of the ten point win on a scoreline of 1-19 to 1-9.

The Maynooth win was built on the foundation of a very strong defence that limited Naas to only one point in the second half. Matthew Eustace and Luke Murnane marshalled the square excellently, Kevin McNeill and Daniel O’Meara both kept Naas’ dangerous forwards, Ferran O’Sullivan and Charlie Sheridan, in check while Cian O’Neill and Cathal O’Donovan ensured the half back remained solid throughout.

It was a great honour for joint captains, Matthew Eustace and Cathal McCabe, to accept the Rory Kelly Cup, named in memory of a young Maynooth man who tragically died a number of years ago, from Kildare Hurling Chairman, Colm Nolan. It took a long time for the Minor A Championship to come to Maynooth but it is well deserved for this side that has been managed and coached by Paul Qualter since they were four or five years old. 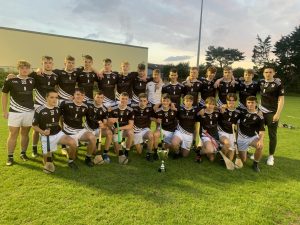