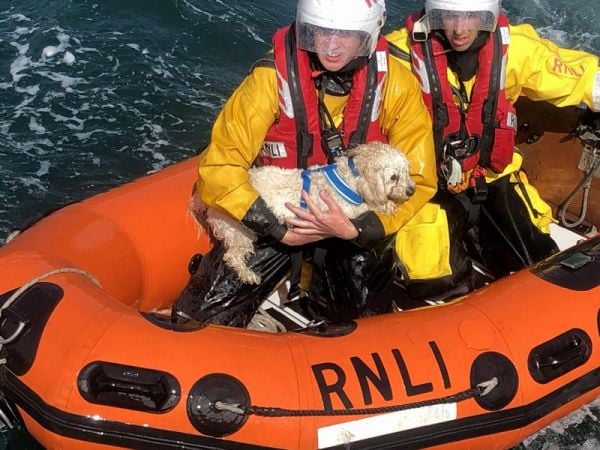 At 2pm the Dunmore East RNLI lifeboat launched at the request of the Irish Coast Guard to locate a dog who had fallen over a 30m cliff a half a mile to the East of Portally Cove.

Eight minutes after launch the Trent Class Dunmore East RNLI lifeboat ‘Elizabeth and Ronald’ and her volunteer crew arrived on scene and assessed the situation.

The dog was sighted on a ledge at the bottom of the cliff. Two of the volunteer crew launched the lifeboat’s XP boat and made their way to the base of the cliff where one of the crew was able to climb onto the rocks to rescue Ellie the dog.

Ellie was brought back to Dunmore East harbour where she was happily reunited with her family.

Roy Abrahamsson, Dunmore East RNLI Coxswain, said: “Weather conditions were good at the time and our volunteer crew did a great job in rescuing little Ellie. Our concern with incidents like this is that dog owners may try to get down the cliff after the dog while endangering themselves. Thankfully this was not the case this time, the owners did the right thing in calling for help.”

You can watch the full rescue videoHERE