Our report on Klub Kildare U17’s by Pat McNally as it appears in this week’s Kildare Nationalist, in your shops now.

WITH the Under 14 and Under 15 team idle this weekend all focus was on the last game of the U17 Phase 1 Section. It was very simple win and Klub Kildare would end up with the nine best teams in Ireland at U17 age group.

Klub Kildare 17’s went into this game minus six regulars between injuries, illness and suspension. Manager Jamie Smith had to call on some the U14 and U15 squad to complete the squad. “ It is great that we train together as it means players know one another and know how they play. It is days like this that it makes it worthwhile.” the Manager said. 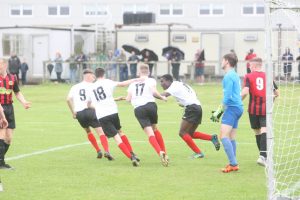 Carlow Kilkenny came into this game with nothing at stake for them other than bragging rights. Klub Kildare started very nervously and it showed as Carlow Kilkenny took control of the game. At this stage it was the defensive duo of Colin Bolton and Osaze Irhue who stood tall and kept Carlow Kilkenny at bay.

Klub Kildare were not without their chances as first Conor King had a great shot down at the keeper’s right hand post but Cian Culleton got down to turn the ball around for a corner. After twenty minutes Klub Kildare were unfortunate when Conor King got down the line and
played in Alex Conlan whose cross was me by Jamie Murphy but the ball went over the bar.

After forty tow minutes the dreaded fear happened as Dylan Hand opened the scoring for Carlow Kilkenny with a great volley that left Fintan Agnew in the Klub Kildare goal stranded. The goal resulted in Jamie Smith making a few changes with Jonny Adedeji being brought on for the second half.

It took only ten minutes for Jonny to make his mark and he equalised with a header from a corner. The rejuvenated Klub Kildare were now back in the game and two minutes later Klub Kildare went in front when former Carlow Kilkenny player Jamie Murphy scored the winner.

Carlow Kilkenny continued to put pressure on Klub Kildare defence and it was at this stage that James Crawford, Leo Healy and a man of the match performance from Alex Conlan that kept Klub Kildare in the game and ultimately now into the Elite phase.

EA Sports U17 National Underage League Elite Phase
Jamie Smith, the Klub Kildare U17 Manager, was delighted following the victory over Carlow Kilkenny. “For a team with 75% of the players eligible for next season to qualify for the Elite phase is a massive achievement. I don’t think people appreciate this achievement. We will now be playing against the Elite of Irish Soccer” he enthused.
The top nine U17 National League Teams are:
Drogheda United,
Derry City
Dundalk,
Bray Wanderers
Klub Kildare
Bohemians
St Patrick’s Athletic
Waterford United
Shamrock Rovers.
Klub Kildare are the only U17 team who do not have a full League of Ireland set up. Klub Kildare U17 Manager, Smith said, “We try to be as professional as possible and it has worked out great for us with Tougher Park and shortly with our new all weather pitch will allow us to take our set up to a new level.”

Next week sees Klub Kildare take on Damien Duff’s Shelbourne in in the second round of the Cup in the AUL Complex.