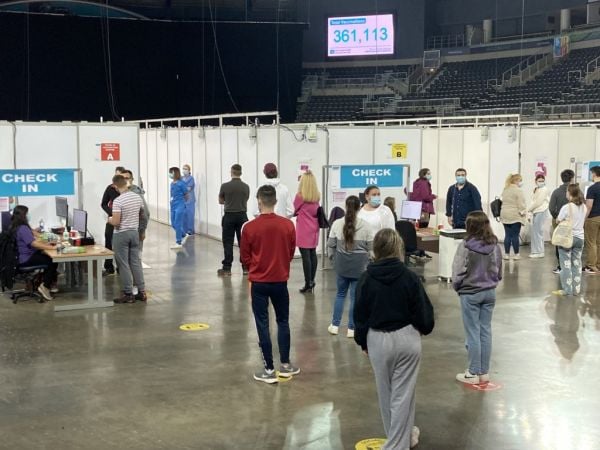 The ‘Big Jab Weekend’ sees mass vaccination centres opening again for first doses for adults amid concerns over the soaring number of Covid cases in the region.

The initiative got off to a good start with reports of queues forming at several vaccination centres.

More than 100 people were at the SSE Arena in Belfast before the doors opened on Saturday and the Western Health Trust reported queues at three centres in its area.

The Belfast Trust said a “great start” had been recorded with queues at Whitla Hall.

About 86 per cent of the population in Northern Ireland has received their first dose of a vaccine, but concerns have been repeatedly expressed about a lower uptake among younger people.

Health Minister Robin Swann said reaching another five per cent could cut in half the numbers of people being admitted to hospital with Covid-19.

This weekend all Northern Ireland’s mass vaccination centres will offer walk-in first jabs for all adult age groups, and there will be walk-in pop-up clinics across Northern Ireland, and jabs by appointment at participating community pharmacies.

The Department of Health said it will be the last chance for anyone aged 18 and over to get their first jab at a mass vaccination centre, as they will soon be winding down.

They stopped offering first doses to the general population at the end of July, but are resuming for this weekend.

People aged 16 and 17 will be able to access the centres for a first vaccine dose until the end of August.

📢What are YOU doing this weekend?

All the details for Saturday 21 August #BigJabWeekend vaccination clinics are here!

On Friday, Northern Ireland recorded its highest number of Covid-19 cases in a day since the start of the pandemic.

Some 2,397 confirmed cases of the virus were notified, along with nine deaths of patients who had tested positive

There were 388 Covid-positive patients in hospital, with 47 in intensive care.

The region is in another wave of the virus, and Wednesday saw the highest number of Covid-19-related deaths since February.

Mr Swann said: “The latest figures on our Covid-19 dashboard are deeply concerning, both in terms of deaths and new cases

“The Delta variant is taking its toll on Northern Ireland and it is vital that as many of our citizens as possible are vaccinated.”

Northern Ireland has the lowest vaccination rate in the UK, with more than 150,000 adults yet to be vaccinated.