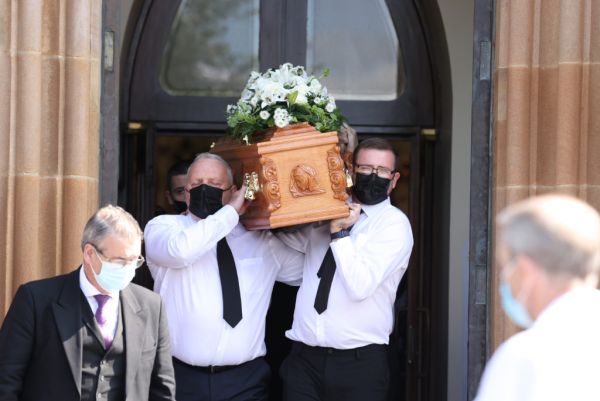 There were tearful scenes in Derry on Monday as a new mother who died after contracting Covid-19 and before she got to hold her daughter was laid to rest.

Her two-week-old daughter, Eviegrace, was baptised during the service at St Columb’s Church.

She had not been vaccinated before she died, and her husband Josh urged all those not vaccinated to come forward for the jab.

The funeral came on the day that nine further deaths of patients who had tested positive for Covid-19 were reported in Northern Ireland, along with another 1,320 confirmed cases of the virus.

On Monday morning there were 352 Covid-positive patients in hospital, of whom 43 were in intensive care.

Stormont health minister Robin Swann appeared to rule out another lockdown being agreed at the next meeting of the Executive in September.

“I don’t think we are at that point yet about putting more restrictions back in,” he told the BBC.

“The Executive meets again in the first week in September in regards to what’s still in place and what we’ll look at in regards to the next steps, and that’s where that decision will be made.”

Meanwhile, it has been estimated that around 8,000 vaccinations were administered in the North’s ‘Big Jab Weekend’ initiative. The official figure is expected to be released later.

Following the closure of the large-scale vaccination centre at the SSE Arena in Belfast, the next phase of the programme is set to focus on localised pop-up walk-in clinics, both in high footfall locations and in areas where accessibility issues and other barriers may have impacted on take-up.