IN form Curragh based trainer Johnny Murtagh, who landed a knockout blow on York’s Knavesmire last Saturday with Sonnyboyliston in the prestigious Sky Bet Ebor, is now launching his bid to scoop one of the big mile handicaps of the season in the Paddy Power Irish Cambridgeshire at The Curragh on Friday evening courtesy of Carrytheone. 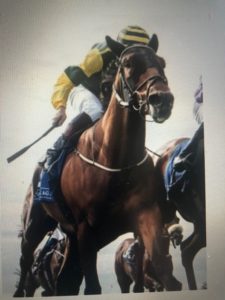 Johnny Murtagh’s Carrytheone in action in The Curragh in June of last year Photo: INPHO/James Crombie

The four-year-old, who is a 10-1 chance with sponsor Paddy Power, won twice over course and distance last season including a maiden in July and then ending his campaign with a half length defeat of Mythologic in a handicap at the end of September.

The handler is realistic enough to know that his charge has not been seen in public for 335 days and should improve, but he might just bely those odds as Murtagh has aspirations of pattern events in time.

The former top-class jockey said: “It’s been a bit of a stop start season with a few niggly injuries and he hasn’t had a run, but he’s in good shape and is as fit as I can get him although I expect him to come on for the run. He loves The Curragh so the track is not a worry and the ground should be lovely.”

Carrytheone has an entry in the Group 2 Clipper Logistics Boomerang Mile at Leopardstown on Irish Champions’ Weekend.

When asked if he thought the Lope De Vega gelding might be a Group horse, Murtagh replied: “I’m hoping he is – he’s high in the ratings off 103 so there’s only a few handicaps that I can run him in. I’m hoping to make the step up to Group class with him although that is a big step and he’ll have to run well.

“He’s been off the track a long time and the owners [Any Excuse For A Holiday Syndicate] have been very patient. I think that I have him as fit as I can, he’ll probably need the run a little bit, but then come out and finish the season well.”

Racing begins at The Curragh at 4.15pm on Friday evening.