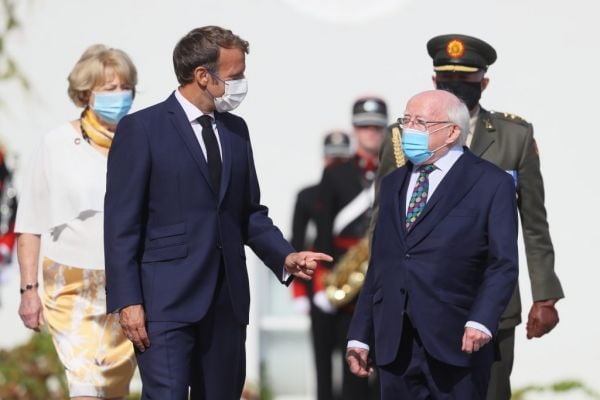 French president Emmanuel Macron has been welcomed to Ireland by President Michael D Higgins at Áras an Uachtaráin.

Writing in the guestbook, Mr Macron said Ireland “occupies a precious place in the heart of the European dream”.

He said France will “remain a faithful friend” to Ireland in future.

He wrote: “Because Ireland has constantly struggled in favour of peace, was a land of the silent before it became the land of the welcome, because its society showed solidarity and is open, Ireland occupies a precious place in the heart of the European dream.

“Your invitation on this day to meet the minds which shape Ireland is a great honour and a source of inspiration.

“France is your closest neighbour within the European Union and will remain a faithful friend for the future. In confidence, Emmanuel Macron.”

Mr Macron arrived at the president’s residence in Dublin’s Phoenix Park at around 10.30am on Thursday, accompanied by his wife Brigitte.

The two presidents discussed a range of topics including the future of the European Union post-Brexit, social Europe, Africa, and the global Covid-19 vaccination programme.

Climate change and the ongoing situation in Afghanistan, Ethiopia and Haiti were also on the agenda.

An Áras statement said: “The meeting builds on the very close and positive bilateral relationship between the two countries, a partnership based on the shared European values of tolerance, respect for human rights and a commitment to multilateral co-operation.

“President Higgins stressed his support for a social Europe, and the need to develop new connections between economics, ethics and ecology.

“President Higgins thanked President Macron for his continuing support for Ireland, our shared ideals in the European Union and France’s assistance in relation to our citizens in Afghanistan.”

The Army Number One band of the Irish Defence Forces performed the Irish and French national anthems on the arrival of Mr Macron.

The two men later walked out of the garden side of Áras an Uachtaráin and down a gravel path, often laughing as they spoke at length in English.

Mr Higgins asked Mr Macron to ring the Peace Bell, which was inaugurated by former president Mary McAleese to mark the 10th anniversary of the Good Friday Agreement.

Mr Higgins’s two dogs, Bród and Misneach, who have become somewhat famous in Ireland, then came bounding out to greet the pair.

Mr Higgins joked “this is an experienced diplomat, he is nine years old”, as he spoke about Bród, the older of his two Bernese Mountain dogs.

During his one-day tour of Dublin, Mr Macron will meet Taoiseach Micheál Martin, and visit Trinity College and the Guinness Enterprise Centre.

It fulfils part of an election pledge by Mr Macron to visit all 27 EU member states, with Ireland one of only four countries yet to be crossed off his list.

During a working lunch with Mr Martin, Brexit, the future of the EU, Covid-19 and the ongoing situation in Afghanistan are expected to be on the agenda.

The State’s reluctance to sign up to a global corporate tax rate of 15 per cent will also feature, with Minister for Finance Paschal Donohoe to hold discussions with his counterpart Mr Le Maire.

Mr Macron and the Taoiseach will host a joint press conference following the lunch.

Later, Mr Macron will return to Áras an Uachtaráin, where Mr Higgins will host a reception in his honour.