In St Conleth’s Park Maynooth took on Raheens in the Manguard Plus Kildare Minor Football League Division 1 Final at 7pm with the North County team winning on a score-line of 2-9 to 0-12 after an exciting contest. 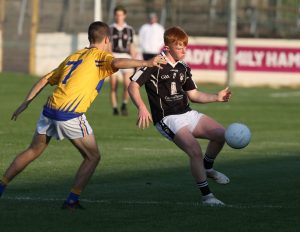 Maynooth’s Patrick Mahoney gets his foot pass away as Raheens’ Jamie McLoughlin closes in during the Manguard Plus MFL Division 1 League Final Photo: Sean Brilly

Meanwhile an hour later in Hawkfield, Balyna had just too much for Sallins in the Manguard Plus Minor Football League Division 2 Final winning on a scoreline of 5-19 to 1-15. 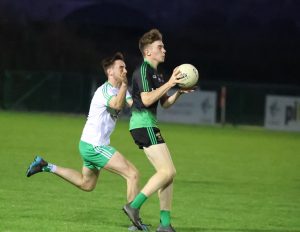 Meanwhile down the road and over a couple of borders the Naas U17 ‘s just lost out to Dicksboro in the Kilkenny Minor A League Final in Nowlan Park. The final score was Dicksboro 1-19, Naas 2-11. 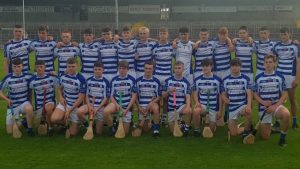