GAELIC Games Europe today announced the launch of a new children’s Gaelic football initiative across the continent of mainland Europe.
Part funded by the Department of Foreign Affairs and supported by Gaelic Armour, a series of regional Féile-style tournaments will be held in each of our five regions this year, and every year, going forward. 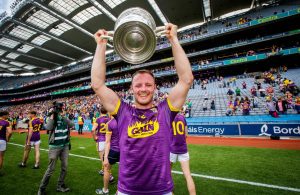 Building on the rapid growth of senior clubs, this investment in youth will be a mainstay in the goal of promoting Gaelic games in Europe ensuring the longevity and vibrancy of the games for years to come.
Gaelic Games Europe is also proud to announce a new partnership agreement with Gaelic Armour.
Gaelic Armour is a fresh and exciting brand in the GAA apparel space and is fully licensed with the GAA, LFGA and Camogie associations.
This new partnership offers Gaelic Games Europe and its clubs a dynamic new range of apparel and Gaelic Games equipment from Gaelic Armour and their partners.
GAA president Larry McCarthy said: “Best of luck to everyone involved with Gaelic Games Europe and their ongoing promotion of Gaelic games across the continent and with this exciting new partnership with Gaelic Armour in particular.
“The growth in popularity of our games across Europe in recent decades has been hugely encouraging and l particularly laud the efforts being made to introduce boys and girls to our games through a new Féile/Continental Youth Championship-type initiative to give the games an even strong footing.”
John Murphy, Chair, GGE added: “Gaelic Armour is an energetic brand that brings a high level of quality, innovation and customization to their GAA apparel. Personalisation, creativity and localisation are the hallmarks of their methodology as exemplified by the Burren-inspired feature on the Clare LFGA jersey. I am excited to see the designs that they will create for the European jerseys.”

Billy Hayes of Gaelic Armour said: “As manufacturers we are trusted by these people to uphold their identity and to tell their club’s unique story. We have a responsibility to  always put this first and understand the role Gaelic Armour plays in protecting and enhancing this special organisation.”

Wexford hurler and the GPA’s co-chair of the National Executive Matthew O’Hanlon, lent his support to today’s launch event at Croke Park. He played football with Madrid Harps in 2013 while studying International Business and Spanish.