NAAS native,  James Roe and Turn 3 Motorsport, who enjoyed a good weekend racing in St Louis last weekend, will head to New Jersey Motorsports Park in the US this week for a triple race contest in the Indy Pro 2000 Championship. The 2.25-mile, 12-turn Thunderbolt Raceway road course will be home to the penultimate event of the season, and with three races taking place, there will be a significant amount of championship points at stake going into the weekend. 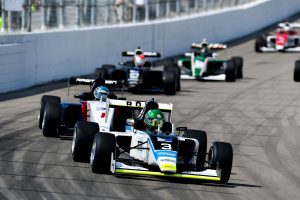 Speaking this week, James Roe said, “I’m really looking forward to this weekend at New Jersey Motorsports Park, especially after coming off such a strong weekend in St. Louis. I had a pole and win at this track in 2018, so it’s a favourite for me, and I’m hungry for more success. Our work will be cut out for us in testing to get the car where it needs to be, but I have no doubt the team will give me the tools to get the job done.”

“New Jersey Motorsports Park will be our biggest race weekend so far this season,” said Team Owner, Peter Dempsey, who is originally from Ashbourne in Meath “We have a lot of races, and it’s going to be important that we work together as a team to maximize our potential. We had a good two day test here a few weeks back, so I’m looking forward to getting the event started and seeing where are come Friday. The last two events are always your final push of the season, and it’s important for the drivers that aren’t in the championship hunt to perform at their highest level. I feel the team is as well prepped for this weekend as we have ever been, and we will give our drivers the tools they need to go out and get the job done.”

Friday will be a pre-event test day followed by official practice, qualifying, and the first of three races on Saturday. Sunday will host another qualifying session and two more races.