LEINSTER Senior League side Maynooth University Town host League of Ireland First Division outfit Cobh Ramblers in the Extra.ie FAI Cup on Saturday evening at John Hyland Park, Baldonnell, as they look to seal their place in the last eight of the competition (kick-off is at 7pm).

Maynooth head into Saturday’s game having seen off fellow junior side Malahide United in the first-round proper of the FAI Cup. Former Longford Town and Wexford forward Paddy O’Sullivan netted a hat-trick in a 4-0 win. 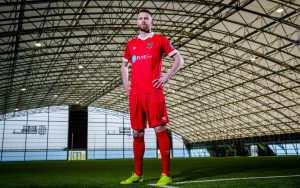 And this Maynooth side has no shortage of League of Ireland experience about them. Former Dundalk and Shamrock Rovers forward Ciaran Kilduff is involved with the club’s coaching staff after he retired at the end of the 2020 season with Shelbourne.
Speaking ahead of the game, Kilduff admits that he, and his side are relishing a crack at a League of Ireland opponent. “It’s a great opportunity for our group,” he said. “No disrespect to Cobh but they are a First Division side, and they are a side that we feel we can give a good account of ourselves against. They are a League of Ireland club, but for a club like us and for what we want to do in the future, it’s a big opportunity.”

“We’re looking forward to it. Our lads are enjoying the buzz around the game and it’s important that we make the most of it because the opportunities are there. It’s a great game to be a part of and we’re looking forward to welcoming Cobh for what I feel will be a close enough game. We’ll be ready but they will be too.”

Cobh come into the game winless since their last cup win over Liffey Wanderers and are in 9th position in the First Division table. Although, they have impressed at times this season. There are doubts over the fitness of Pierce Phillips, Jake Hegarty, Cian Murphy, Darryl Walsh
and Danny O’Connell for the Rams, however. Neither side have any suspension issues to contend with ahead of this evening’s game.

It has been a good week for those involved in soccer in Kildare with three players, Mark Travers, Andrew Omobamidele and Nathan Collins all included in Stephen Kenny’s Republic of Ireland’s Senior Squad and Andy Lyons included in Jim Crawford’s U21 Squad.

Maynooth University Town FC will be looking to keep the good news going when they face Cobh Ramblers on Saturday evening.

A full report on the game will appear in next Tuesday’s Kildare Nationalist.