By Andrew Dempsey
MAYNOOTH University Town FC dumped League of Ireland First Division side Cobh Ramblers out of the Extra.ie FAI Cup on Saturday night with a superb 3-2 win. 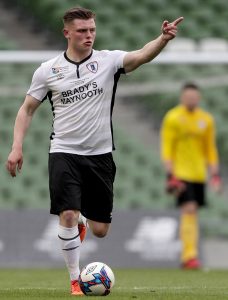 Goals from Jack O’Connor and Jackson Ryan set the Town on their way to their first-ever appearance in the last eight of the FAI Cup after John Kavanagh’s own-goal gave them a first- half lead. But Shane Harte’s side were pegged back on two occasions with Conor Drinan and Jason Abbott restoring parity for the First Division side.

It was a night that belonged to Maynooth, however.

Jackson Ryan capped off a sensational display to seal the deal for the Leinster Senior League side with a brilliant finish in the 81st minute.
The former Longford Town forward pounced on an exquisite defence splitting ball from Eoin O’Neill to slot home past Cobh keeper Sean Barron.

And it was that goal which condemned their opponents to defeat at John Hyland Park as Cobh finished the game with ten-men.