Police station in North like relic of the Cold War, says chief constable 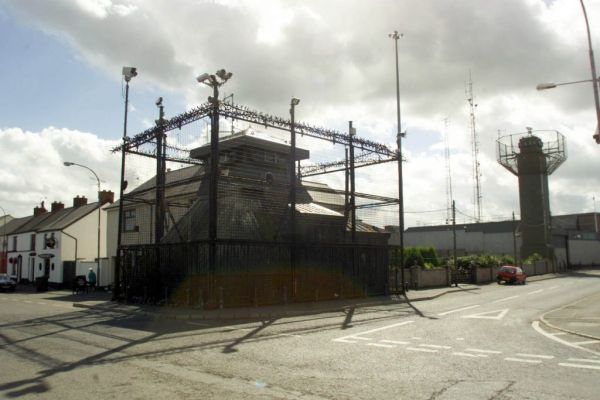 Northern Ireland’s chief constable has described a police station in south Armagh as reminiscent of the Cold War.

Simon Byrne spoke after announcing the findings of a report following a review of policing in south Armagh.

It includes a recommendation to close the heavily-fortified police station in Crossmaglen.

The south Armagh region was heavily militarised during the Troubles in Northern Ireland in response to a high level of threat from the Provisional IRA.

However, the army watch towers were removed in the 2000s following the Belfast Agreement.

The recent review of policing in the area came after a photograph of Mr Byrne with heavily armed officers outside the station in 2019 on Twitter sparked outrage.

It came not long after Mr Byrne had taken up the role of leading police in Northern Ireland.

“I visited twice from memory in 2019, and I was quite taken aback at deep-seated concrete walls, high fences and cameras,” he said.

“It looked like a relic from the Cold War, never mind the Troubles.

It looked like a relic from the Cold War, never mind the Troubles

“And I do think one of the constructive things that will come out of this review is our determination to build a new fresh for purpose facility that is more steel and glass and less about concrete to serve the public of this part of Northern Ireland.”

Asked if he regretted that tweet, Mr Byrne told the PA news agency: “Sometimes I do regret it because it caused a controversy that is always unwelcome, but equally I now find myself asking had I not done it, would we be stood here today? Because perhaps some of the concerns and issues that hadn’t been seen because of poor leadership and group-think frankly might not have been self-evident until it was too late.

“Out of something that caused some concern and controversy, I think we’ve got something that is constructive and good and we can build on for the future.”