KLUB Kildare defender, Ruadhan Kane, has been included in the Republic of Ireland 20 man U17 Squad by Head Coach, Colin O’Brien, for two friendlies against Mexico in Turner’s Cross, Cork over the next few days. 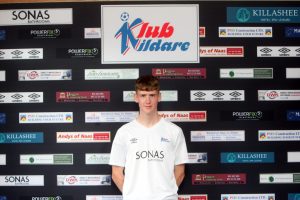 The 16 year old Prosperous player is selected on the basis of some strong performances for Klub Kildare in the Underage National Leagues over the last few years. His team mate, Tristan Hughes, could count himself unlucky as injury prevented him from being considered for inclusion in the squad.

Commenting on Kane’s inclusion in the U17 Squad, Pat McNally, of Klub Kildare, said that they were delighted for Ruadhan and wished him luck over the two games.

A limited number of fans will have the chance to catch a glimpse of the next generation of Irish internationals with 600 free tickets made available for spectators.

It will be final preparation for the U17s ahead of their UEFA U17 European Championship qualifiers which also take place in Cork in October.

O’Brien’s youngsters face North Macedonia, Poland and Andorra in the first round of qualifiers but before that they take on North American opposition in the Rebel County with games on Sunday, 5 September and Tuesday, 7 September.

Speaking ahead of the games, O’Brien said: “To get this level of opposition is a real huge plus for us. Mexico is a real powerhouse at this age group if you research and examine their age groups in the past couple of years they’re a World Cup standard team and that will the standard over the two games we will be playing.

“It’s a very ‘homebased squad’ and it’s the first squad we’re going to see around the Brexit situation but the players are well into their season and we’ve done a lot of homebased assessments and training camps over the last few months and a lot of games watched.

“We’ve 20 players ready to represent the Republic of Ireland U17s against high-level opposition so the players are going to be really tested here, both collectively and individually, and it will give them a good measure to where they’re at.”

Republic of Ireland Under-17 squad