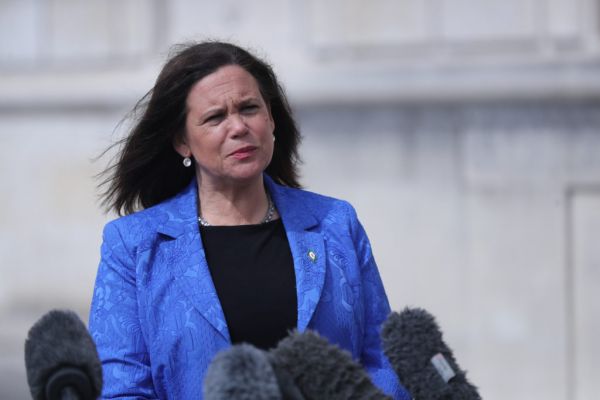 Sinn Féin leader Mary Lou McDonald has called on the Taoiseach to take action on the controversy over the appointment of Katherine Zappone as UN special envoy.

“What we’ve seen here has been the latest instalment of insider, crony, cosy politics around Fine Gael in particular, and with the Government more generally, it’s clear that a makey up job was provided for a friend of Government, in this case Katherine Zappone.

“The Minister needs to go back into the committee and give a full, frank and credible explanation as to what happened.

“The Taoiseach does need to take action. It is incredible that yet again we see the head of Government blindsided by the two principles from Fine Gael and that when something like this emerges that the Taoiseach fails to take action.

“We all know that the Government makes appointments and that’s part of governance, but there have to be procedures, there has to be oversight, transparency. Being in Government isn’t a green light to look after their mates — whether that’s leaking documents to them, confidential documents or making up jobs and titles for them.

“It’s entirely unacceptable, it’s the worst face of that old time crony Fianna Fáil, Fine Gael politics that people are sick to the back teeth of, that undermines confidence in Government and in politics generally.

“What we’ve seen here is the invention of a makey up job for a friend and then a desperate effort to cover their tracks including deleting texts, giving incomplete information to FOI requests.

“The Taoiseach, if he wishes to continue leading Government, actually has to lead from the front. When he was blindsided he heeded to put the brakes on things to put a stop to it … He should have put a stop then, he failed to do that.

“He should insist there is the fullest accountability and explanation by Simon Coveney and Leo Varadkar and anyone else involved.”

Ms McDonald said that questions remained about the event at the Merrion Hotel — it was still not clear the purpose of the event, was it a victory lap, who paid for it?

It was “absolutely clear” that there are double standards, she said. “It seems to me there is a belief at the heart of Government that certain people can duck and dive and have a very loose interpretation of the rules and the standards that would be expected of anyone filling a ministerial post.

“If the Government chooses to operate and behave in a way that is more reminiscent of a sort of a satirical Ballymagash version of Irish political life, where it is who you know not what you know and it’s you scratch my back and I scratch your’s, jobs for the boys, jobs for the girls, insider cosy dealings, leaving people outside, of course that corrupts and undermines the capacity of Government to deliver and it also enrages public opinion.”