Varadkar rejects suggestions he and Coveney should resign after Zappone controversy 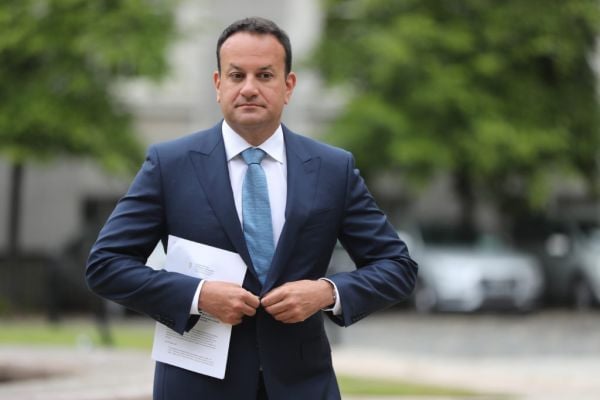 Tánaiste Leo Varadkar has rejected suggestions that he or Simon Coveney should resign from Government over the Katherine Zappone controversy.

Mr Varadkar has denied that the Zappone controversy is causing a distraction for the Government.

He said: “I don’t think this is causing a distraction for Government. Bear in mind, I’m here in Northern Ireland doing my work as Minister for Enterprise, Trade and Employment.

“Minister Coveney is in Slovenia doing his work as Minister of Foreign Affairs.”

“So we’re focusing as a Government on Covid, on housing and the big challenges. Certainly nobody in Government is distracted anyway.”

Mr Varadkar has said there will not be any sanctions for the Freedom of Information (FOI) officer who failed to release text messages related to the  controversy.

Mr Varadkar himself released the messages on Wednesday, and apologised for the failure to share them when requested by journalists.

Speaking on Friday, he said: “That FOI officer doesn’t work in the department any more. There won’t be any sanctions for them.

“As I think has been explained by my department, the FOI officer did their job. They looked up the emails, looked up the paper records, didn’t find anything.

“Because I was away and my senior staff were away, I wasn’t asked whether I had any messages on my phone. That’s what happened, an honest oversight. I don’t think there will be any consequences for the official involved. It would be very unfair.”

He said procedures would be put in place to avoid a repeat of the situation, but added this could mean “delays” to the FOI process.

Mr Varadkar has said both he and Foreign Affairs Minster Simon Coveney “accept our responsibility” over the handling of the Katherine Zappone controversy.

He said the appointment of Ms Zappone as a UN special envoy on freedom of expression “wasn’t handled in the right way”.

Mr Varadkar added: “Unlike other special envoys, it was politically sensitive because she was a former cabinet member.

“There was a responsibility on Simon or me, or both of us, to inform the Taoiseach and Minister (Eamon) Ryan in advance. We didn’t do that. That’s essentially what happened, and we need to ensure that doesn’t happen again.”

He denied that it reflected badly on Mr Coveney that he had not released text messages related to the appointment, while the Tánaiste had.

Mr Varadkar said: “The difficulty is I suppose, Simon when he was making his account to the committee had deleted the texts. I still had them, so I was able to jog my memory and remember what had happened or not. But bear in mind this is an appointment that did not proceed.”

Earlier, the Tánaiste apologised for a failure to release texts between him and former minister Zappone in response to initial Freedom of Information (FoI) act requests from journalists.

The texts concerned the Merrion Hotel gathering and Ms Zappone’s appointment as a UN special envoy.

On Wednesday, Mr Varadkar released a series of texts between him, Ms Zappone and Minister for Foreign Affairs Simon Coveney.

Journalists who had submitted Freedom of Information requests had been refused on the grounds that no records existed with many taking to social media to highlight the inconsistency.

In a response on August 21st, the Department of Enterprise refused the request, stating: “the record concerned does not exist or cannot be found after all reasonable steps to ascertain its whereabouts have been taken”.

In the texts which Mr Varadkar released, he and Ms Zappone discussed the Merrion Hotel event and her appointment by the Government as a UN special envoy for human rights.

Mr Varadkar has said he was on annual leave at the time the FoI requests were processed, and was not contacted to check his phone for any records.

In a statement issued on Thursday, Mr Varadkar said he had looked into the issue within his department.

“The relevant FoI office who received the request checked all emails and letters and found no records,” he said.

“I was on annual leave at the time the decision was released and I wasn’t contacted to check my phone for records,” he added.

Mr Varadkar said procedures would be introduced to ensure “this does not recur”, adding “we are of course sorry this happened”.

Former Minister for Agriculture Barry Cowen has said that Taoiseach Micheál Martin needs to resolve the controversy over the appointment of Katherine Zappone to a UN special envoy role.

Mr Cowen pointed out that the Taoiseach had been very decisive “on similar matters in the past” and he should now bring the issue to a conclusion so that the Government could focus on “more important matters”.

The Laois-Offaly TD acknowledged that within the Fianna Fáil party concern had been expressed that Fine Gael TDs were “getting away” with issues while Fianna Fáil TDs had resigned or been sacked.

“We need to move on, there is more important Government business,” he told RTÉ radio’s Morning Ireland.

When asked if he thought Tánaiste Leo Varadkar and Minister for Foreign Affairs Simon Coveney should resign over their involvement in the appointment of Ms Zappone, Mr Cowen said it was up to them to make that decision, but that the Taoiseach needed to address the issue and the content of the texts.

The details contained in the texts which were presented at an Oireachtas Committee meeting this week were “very disconcerting and very disappointing”, he said.

The public backlash had been understandable, and he had thought the issue was resolved when Simon Coveney had apologised, and it had been agreed that there would be greater clarity and transparency in future for such appointments.

But the revelations at the committee indicated that Mr Varadkar and others in Fine Gael had been “a lot more aware” of what was happening. Katherine Zappone had been looking forward to the role when no one was aware of it.

Minister for Higher Education Simon Harris has defended the actions of Mr Coveney whom he said was “only too willing” to provide clarification about the appointment of Ms Zappone as UN special envoy.

Paper work will be published by the Department of Foreign Affairs to detail the pathway to the appointment he told RTÉ radio’s Morning Ireland.

While the issue was one of concern, he acknowledged, there was a need to “step back” and allow Mr Coveney answer the questions raised by the Oireachtas Committee.

There needs to be a sense of perspective in this.

When asked if this was a resigning matter for Simon Coveney and Leo Varadkar, Mr Harris said that the Taoiseach had made it clear that the position of the Government was that lessons had been learned.

Everybody “fully accepted” that the entire process (the appointment) could have been handled differently, he said.

Mr Coveney had volunteered the information about his text messages and would provide clarity why he had deleted texts.

“We need to step back here and remember what Simon Coveney was trying to do.” He denied that it was a case of the Minister for Foreign Affairs “divvying up” jobs.

“It’s important to allow the Minister to answer questions. He has admitted that the process followed was not right and apologised to the Taoiseach and the leader of the Green party.”

Mr Harris said that Mr Coveney would “robustly defend” the charge that he misled anyone. He would also provide information about the hacking of his phone. — Additional reporting from Vivienne Clarke and Press Association