KILDARE’S James Roe earned some of his best results of the season at last weekend’s Cooper Tires Indy Pro 2000 Grand Prix Presented by The Andersen Companies at New Jersey Motorsports Park. Roe came on strong in Saturday’s Qualifying 1, putting out a lap time that saw him starting Race 1 on the second row in P4, his best qualifying effort on a road course so far. 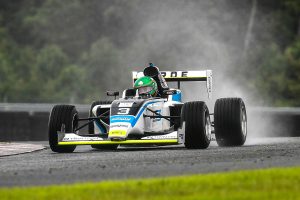 In Race 1, all of the leaders went for gains in the opening lap, shuffling Naas man, Roe, back to P6 but out of trouble. As the race carried on, Roe worked to catch the fifth place car of Jacob Abel while also holding off championship contender Braden Eves behind him, finally finishing the race in sixth, his best finish on a road course up until that point.

Sunday’s Qualifying 2 was a wet one as rain started to fall over the 2.25-mile circuit. With a strong strategy in place, Roe and the team set out for a first row qualifying attempt during the 20 minute session. On his final lap, Roe was on a run fast enough for the pole by almost a second but made a mistake that sent him off course, resulting in a P8 starting position for Race 2. Roe had a great start in Race 2, picking up two spots on the opening corners and pushing forward until an incident with the #40 car of Jack William Miller called him into the pits for repairs, ultimately scoring him four laps down in P10.

Roe started P10 for Race 3, eager to recuperate positions during the 25-lap contest. On the opening lap, the rookie passed three cars in his pursuit, quickly taking him up to P7. When the competition ahead of him made some mistakes, the Irishman was able to take advantage and improve to P4, matching his best race finish of the season and solidifying his best road course finish of the year.

“I’m happy with the weekend overall,” said James Roe. “To come away with another top four finish the second weekend in a row was really positive for us. We worked really hard on the car throughout practice and brought it on a lot, then we qualified on the second row for Race 1 which was great. In Qualifying 2, we played the long game, and I laid it all down on the last lap. It was about to pay off as I was on a lap good enough for pole position by almost a second, but then I over cooked it and ended up P8, so I’m still hurting from that mistake. It was a weekend of ‘what could have been’ in many ways, but we still had some really good results, so I’m very happy. Massive thanks to the team for giving me the tools to get the job done.”

“The event at New Jersey Motorsports Park was certainly one of James’ strongest road course performances of the season,” said Team Owner Peter Dempsey. “Being his first time there in Indy Pro 2000 and not having raced there last year, he had a bigger task ahead of him compared to his competitors. He really worked hard through the practice sessions to get him in a great spot for qualifying and did a very good job in Q1 to put the car on the second row of the grid. It’s the closest he’s been to the leaders all season on a road course. Race 1 was a solid job to finish P6 and bring the car home.”

“Q2 was wet, and James has had very little time in the car in the rain,” continued Dempsey. “We did a good job to put him in the position for pole, but unfortunately, he came up short. This made the last two races difficult having to start P8 and P10 but again, he did a nice job in Race 3 capturing his best finish of the year. We’ll go back to Mid-Ohio stronger than we were a few weeks ago. James has come a long way over the past couple of events, and we are excited to finish out the season strong.”

Just one round of racing remains in the 2021 Indy Pro 2000 Championship Presented by Cooper Tires where the series will return to Mid-Ohio Sports Car Course October 1-3 for the season finale.