Omobamidele Retains Place But Travers And Collins Out Of Irish Squad For The Matches Against Azerbaijan And Serbia.

There were mixed fortunes for Kildare’s representatives in the Republic of Ireland Senior Squad on Friday with the announcement that Maynooth’s Mark Travers (Bournemouth) and Leixlip’s Nathan Collins (Burnley) have withdrawn because of injury but Leixlip’s Andrew Omobamidele (Norwich), who made such an impression as a first half substitute against Portugal on Wednesday, retains his place for the matches against Azerbaijan and Serbia. Dara O’Shea, who Collins replaced on Wednesday, is also ruled out with injury. 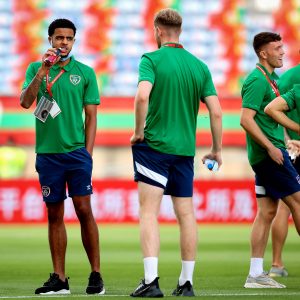 Another player with Kildare links, Jamie McGrath, who starred in Faro, has also retained his placed in the squad, McGrath is a Maynooth University Business Graduate and played for the University.

The Ireland squad travelled back to Dublin on Thursday and will train at the Aviva Stadium later on Friday ahead of the Azerbaijan match on Saturday.