DESPITE not being able to compete for the last 18 months or so Caragh’s Patrick Monaghan put in a battling performance to final in 12th place in a time of 1;32;54 in the T54 Marathon on the final day of the Paralympics in a wet Tokyo. 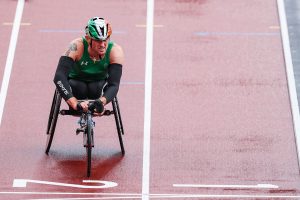 Kildare’s Patrick Monaghan on his way to finishing 12th in the Paralympics T54 Marathon on the final day at a wet Tokyo Photo: INPHO/Tommy Dickson

Speaking to the Kildare Nationalist before departing for the games Patrick, who also competed at the Rio Paralympics, was concerned about the course with the last five or six kilometres all uphill but said it would be a fine line between managing his health and pushing as much as he could on the course.

The Raheens GAA clubman reached the 15km mark just over the 30 minute mark and had recorded a time of 1:15:19 by the 35km mark as he headed back towards the Olympic Stadium in Tokyo where the Marathon started and finished.

The Race was won by Marcel Hug of Switzerland.

Monaghan will be happy to get that race under his belt as he heads off to compete in Marathons in London, New York and Chicago shortly.