THERE were plenty of appointments at Tuesday’s Kildare Co Board meeting but not the one that has grabbed the attention over the last couple of days, that of Senior Football Manager. 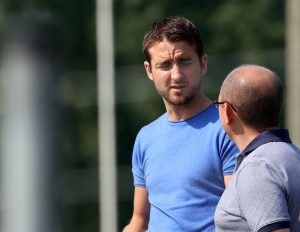 County Chairman, Mick Gorman, advised the meeting that a consultant would be appointed and that he would work with a three person county sub committee to establish criteria and invite expressions of interest on Thursday which are to be returned by Friday 17 September.

The Chairman didn’t rule out the possibility of the sub committee approaching someone within that time frame if they thought it was in the best interest of Kildare.

On the hurling side David Herity was ratified as Senior Hurling Manager on a three year term, with a review after two years. He will have Declan O’Toole and Paul Dermody as Selectors with a further selector and a coach to be appointed in the coming weeks.

There was disappointing news that U20 Hurling Manager, Pat English, had stepped down however continuity was maintained by the appointment of last year’s Minor Manager, Eoin Stapleton, as U20 Hurling Manager and the Garryspillane native will have Tom Walsh, Cian Hogan, Pat O’Meara, Liam Dolan and Mairtin Boran as his selectors.

Stapleton’s position as Minor Hurling Manager will be taken by Joint Managers Noel Ryan and Mark Moloney and their selectors will be Sean Bean, Brian Frisby and Darragh Nolan.

On the football side, as well as a vacancy at senior level, there is now also a vacancy at minor level where Cyril Kevlihan has decided to step down after a year, and, like the senior manager vacancy, the process of filling the minor vacancy will commence on Thursday night.

At U20 level Brian Flanagan and his selectors, Emmet Bolton and Mark Scanlon will be returning for the second of their two year term.