LEIXLIP’S Andrew Omobamidele will earn his second senior international cap when he lines out for the Republic of Ireland in a vital World Cup Qualifier against Serbia on Tuesday evening, KO 7.45pm. 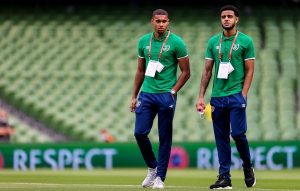 The former Leixlip United player, now playing with Norwich City, made an outstanding contribution off the bench in the match against Portugal in Faro last week. It was a major surprise when he wasn’t included in the side that drew with Azerbaijan in a disappointing night at the Aviva on Saturday night.

With skipper, Seamus Coleman, out injured, Shane Duffy will captain the side which also welcomes back Jamie McGrath, another surprising omission on Saturday night after a great showing in Faro.