WITH all that is happening, on and off the pitch, we have another BUMPER 24 pages of Sports Coverage in this week’s Kildare Nationalist, out now including: 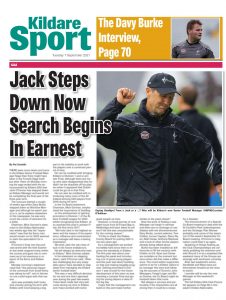 GAA: Jack O’Connor steps down as Kildare Senior Manager, now the search for his replacement begins

Full Coverage of all the weekend Championship action

The Supporter reflecting the views of ….the supporter

LGFA: Round up of the Adult Championships and this week’s fixtures

Paralympics: Report on Patrick Monaghan’s performance in the Marathon in Tokyo

Boxing: Eric Donovan back in the ring

…….and Much More in your Kildare Nationalist in your shops now.