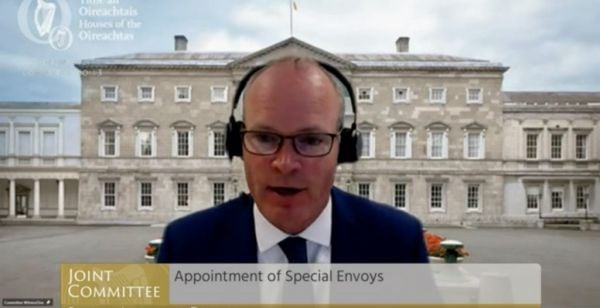 Minister for Foreign Affairs Simon Coveney has denied that he offered Katherine Zappone the job of special envoy in a conversation with her months before the Government approved the appointment.

Facing questions from the Oireachtas Committee on Foreign Affairs, Mr Coveney said he had “raised the possibility” with Ms Zappone that she might fill the role but did not offer her the job.

“I raised the possibility of a special envoy role with Katherine Zappone and asked her if she’d be interested in such a role should the Department develop and recommend it,” Mr Coveney said in his opening statement.

“That phone call was on March 3rd and triggered a text to me from Katherine the following day enthusiastically thanking me for the opportunity. But it wasn’t a job offer at that stage, as I made it very clear that the concept needed to be developed by the department, which is exactly what subsequently happened as the files show.

“Looking back now, I should have been clearer with Katherine on the extent of the work needed in the department before a formal role could be offered to her.”

Mr Coveney apologised for the “sloppiness” of his answers in relation to the controversy, admitting that it has caused a “political embarrassment” for the Government.

He said he failed to explain how this role came about, and apologised that his handling of it led to another hearing.

He said this was due to the “sloppiness” of some of his answers to legitimate questions put forward by committee members.

The Government remains under pressure over the controversy surrounding the abandoned appointment of Ms Zappone as UN special envoy on freedom of expression.

The former children’s minister stepped back from the position after a storm arose around the manner of her appointment.

On Monday, Mr Coveney’s department released more than 100 documents relating to the appointment process of Ms Zappone as a UN envoy.

“In recent weeks a lot has been said and written about me in the context of Katherine Zappone and her proposed appointment as a special envoy,” Mr Coveney said.

“The fact is I have contributed to much of that criticism and commentary.

“I’ve had the privilege of being in public life for 23 years as a TD, MEP and government minister.

“I’ve made many mistakes on that journey, but this is the first time that my integrity has been questioned on my political actions.

“While the Taoiseach has understandably sought to put some context around the political controversy of a ‘part-time, temporary appointment’, in truth this has rumbled on for far too long and should have come to an end on the basis of a clear and credible explanation before now.”

Mr Coveney denied that Ms Zappone asked him for a job, “at any stage”.

“She did text me for advice, on February 22nd, about the possibility of working with USAID on women, gender equality and LGBTQ issues, and whether I could make an introduction for her,” he added.

“That’s all she looked for from me at that point and I didn’t respond.

“Secondly, the idea of Katherine Zappone playing a role for the Irish Government came about from a short conversation I had with my Secretary General on the 24th of February after a meeting, when I raised the question as to whether she might be of use to our team at the UN.

“I hadn’t spoken to Katherine at that stage. The Sec Gen responded positively, but said he wanted to take some time to think about it.

“I told Katherine of that conversation in a phone call on the 26th February and agreed to come back to her when the Sec Gen had any update.

“Niall Burgess subsequently came back to me a few days later to say that the (US president Joe) Biden administration would be appointing a special envoy for LGBTI+ rights and that he was interested in the department exploring the benefits of such a role for Ireland.

“So, it was in that context that I raised the possibility of a special envoy role with Katherine Zappone and asked her if she’d be interested in such a role should the department develop and recommend it.”