By Andrew Dempsey
REPUBLIC of Ireland international, and Kildare native Andrew Omobamidele hailed the importance of taking his chance when it came after impressing in Ireland’s draw with Serbia last night. 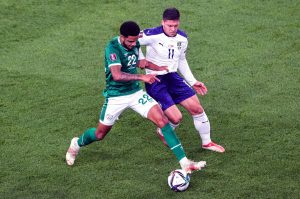 Leixlip’s Andrew Omobamidele in action against Luka Jovic of Serbia in the World Cup Qualifier in The Aviva on Tuesday night Photo: INPHO/Laszlo Geczo

The former Leixlip United defender has suitably fitted in under Stephen Kenny during this international break after starring at club level for Premier League side Norwich City, His start at the Aviva Stadium was just his first start the Boys in Green, and he looked right at home in his surroundings.
“I think the journey over the last couple of years shows how quick football can change,” Omobamidele said. “It shows how fast opportunities can come and you just have to take them. At the start of the season last year, I was playing under-23’s football. And at the end of the season, I was going into one of the best sides in the Championship.
“I stepped into that, and Christmas came and I took my opportunity to play in the last ten games to win promotion. It just shows how fast football can change and how you must be ready to take your chance.”
Omobamidele most certainly took his chance, and it was a performance that typified his rise in recent months.
The 19-year-old from Leixlip lad only learned that he was going to start against Serbia on Monday night, with excitement racing through his veins at the time.
“It’s one that I won’t forget,” he explained. “You can never get your first start in an Irish jersey back so before the game I knew that I wanted to perform. It was my first time at the Aviva starting and playing. I’ve never experienced a crowd like it in my whole career. It is probably the highlight of my career so far.”
“At first you don’t really take it in. But when we left the team meeting, it sank in then that I was starting. I told some of my close family members. It’s a big occasion with it being my first time starting and playing in the Aviva in front of the
whole nation. There were a lot of emotions, and it was a great feeling.”
While Ireland and Omobamidele’s World Cup dreams are all but over after a dreadful start to the qualifying, the teenage defender is hopeful that the Boys in Green can use the late showing against Serbia as a platform to push on.
“I think it’s a huge lift. We didn’t win but it is a huge step. We showed that we could go toe to toe with these nations like Serbia and Portugal. It’s a huge step in the right direction.”

“Hopefully I can take my momentum and performances back to Norwich. I’ll keep my head down, keep training hard and we’ll see what happens,” he concluded
Omobamidele returns to club action this weekend in the Premier League with Norwich City as the Canaries take on Arsenal at the Emirates Stadium. Saturday’s game has a 3pm kick-off.