WITH so much going on, both on and off the pitch, in Kildare sport, we have another BUMPER, 24 pages of sports coverage in this week’s Kildare Nationalist including: 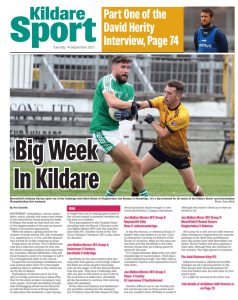 GAA: Reports and Pics from the weekend’s Kildare Championship games

Part One of the David Herity Interview

Tables and Results from the Football Championships to date

Fixtures and Previews of the weekend games

Reports and Results from KDFL League and Cup games

Report on Newbridge Town’s exit from the FAI Intermediate Cup

Racing: Jessica and Johnny to the good at Leopardstown and The Curragh at the weekend

…..and Much More in your Kildare Nationalist, in your shops now or online at www.kildare-nationalist.ie