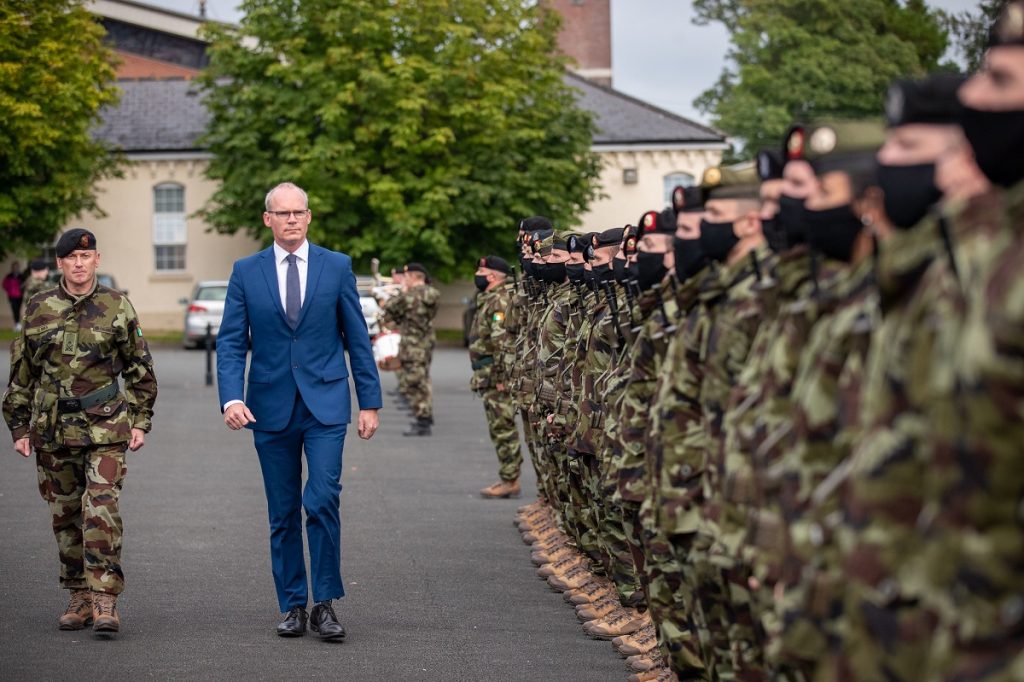 Minister for Defence Simon Coveney was at the Curragh Camp on Monday to review a selection of the members of the 64th Infantry Group who will leave in the coming weeks for service with the United Nations Disengagement Observer Force (UNDOF) on the Golan Heights.

Ireland continues to make a substantial contribution to international peace and support operations relative to its size and, in his address to the troops, the Minister said: “the UN peacekeeping continues to be one of the most flexible and effective tools available to the international community in responding to crises around the world.”

He remarked that “peacekeeping is a proud Irish tradition through which we demonstrate, in the most practical way, our concern and willingness to share responsibility for troubled populations around the globe as they navigate the difficult path from conflict to peace.”

The 64th Infantry Group will rotate into the mission area this October under the command of Lieutenant Colonel James O’Shea (currently living in Prosperous). The group comprises 129 personnel of all ranks – 14 officers, 114 enlisted personnel and one chaplain.

UNDOF Area of Operations (AO) is primarily focused on the Area of Separation (AOS) between the Alpha and Bravo lines. Both lines stretch for a distance of 75km from Mount Hermon in the north to the Jordanian border in the south. The area between both lines is known as the AOS which, at its widest, stretches up to 9km and is 200m wide at its narrowest point. The AOS separates Israeli Occupied Golan to the west of the Alpha Line with the Syrian Arab Republic to the east of the Bravo Line.

The 64th Infantry Group Headquarters as well as the Quick Reaction Force and Group Support Elements will be based in Camp Faouar, situated to the east of the Bravo Line in the Syrian Arab Republic.

UNDOF’s mandate is to maintain a credible presence in the Golan and use its best efforts to maintain the ceasefire between Israel and the Syrian Arab Republic and see to it that it is scrupulously observed. The resolution is updated every six months and the mission is currently operating under UN Security Council Resolution 2581, until December 2021.

The 64th Infantry Groups’ primary responsibility is to act as the Force Reserve Company, under the direct command of the UNDOF Force Commander. The Force Reserve Company’s responsibility is to maintain a Quick Reaction Force (QRF) and also a Reserve Force within Camp Faouar at all times. The QRF is a small, highly mobile and flexible force, which can respond to any request made by the Force Commander within 15 minutes. The requests can range from evacuation of UN personnel from UN positions for various emergency reasons to routine patrols of the AOS. The unit also has various support elements, which allow it to operate self-sufficiently. Engineering, medical, ordnance, transport and logistical personnel will deploy with the unit to act as the supporting elements.

The 64th Infantry Group have undergone extensive pre-deployment training, including dilemma training and scenario-based training. Each soldier has been thoroughly briefed in relation to the rules of engagement and each have received a Tactical Aide Memoire stating these rules which they will familiarise themselves with and carry at all times.

To safeguard local populations and peacekeepers, the 64th Infantry Group will undergo isolation/quarantine in Lynch Camp, Kilworth for the 14 days prior to departure for their flight in the early hours of 7 October. The troops will also quarantine on arrival at the UNDOF mission.