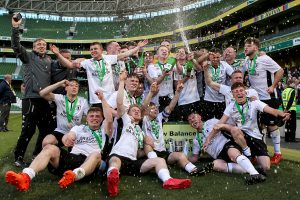 Will it be another night for Maynooth University Town FC to celebrate as they face Bohemians in the Extra.ie FAI Cup Quarter Final in Dalymount Park on Friday night. ©INPHO/Laszlo Geczo

Shane Harte’s side come into the game fresh off the back of a historic win over First Division side Cobh Ramblers in the last round of the competition.
The Town were deserving winners at John Hyland Park as they saw off the ten-men of Cobh with a fine Jackson Ryan winner late on. Despite some worrying league form, they come into this clash against Bohemians with an air of excitement, and confidence.
“The lads are fearless, and they probably fancy their chances against anyone,” Town boss Harte told the Kildare Nationalist ahead of the game against Bohemians. “That’s not just being cocky, it’s the young lads having big ideas about themselves. “I don’t think you should knock that out of them, but we have to be realistic. We’re playing one of the best teams in the country, but we want to go up there and give a good account of ourselves, do ourselves proud and see what happens.”
“If we play Bohs 100 times 99 times they are going to beat us but that one time it does not go right for them, and everything goes right for us. They are in a completely stratosphere to where Cobh are, and we just want to enjoy it. It’s a good day out for the club and those who work so hard behind the scenes,” the Manager added.
On the team news front for Maynooth, talismanic winger Cillian Duffy will miss out after he tore his ACL during the previous win over Cobh in the last round. Bohs, on the other hand, are expected to ring the changes, with top scorer Georgie Kelly missing out through suspension.

A full preview of the game appears in this week’s Kildare Nationalist in your shops now or on-line at www.kildare-nationalist.ie