By Andrew Dempsey
MAYNOOTH University Town’s FAI Cup dream came to a halt on Friday evening at Dalymount Park as Bohemians ran out comfortable 4-0 winners in front of a large home crowd. 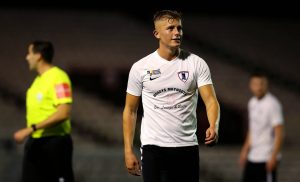 Maynooth University Town FC were disappointed with the sending  off of Alex Kelly by Referee Adrian Reale Photo: INPHO/Ryan Byrne

Goals from Keith Buckley, Conor Levingston and Keith Ward gave the hosts a commanding three-nil lead at the break.
Maynooth also went in at the break down a man, with former Bohs under-19 Alex Kelly dismissed following a late lunge on Dawson Devoy after 33 minutes with the game at 2-0.

Roland Idowu then added the gloss to a comfortable Bohs win as he found the back of the net with a 20-yard effort on goal to bring an end to Maynooth’s fairytale FAI Cup run.