From Celbridge To Cambridge Via Anfield For Conor Masterson

IT’S been a rollercoaster ride for  Celbridge native, Conor Masterson from the time he joined Liverpool as a 15 year old eight years ago. Andrew Dempsey recently caught up with the now 23 year old who now plays with Cambridge United on behalf of the Kildare Nationalist.

FEW get chance to follow their dreams and play under the bright lights of the Premier League. And while Conor Masterson may not have done that, he did get a taste of it at least while he was Liverpool. 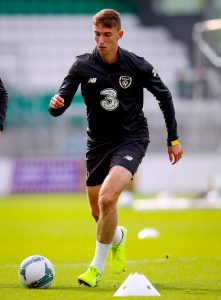 Once of Lucan United, Masterson moved over to Merseyside when he turned 15 to join his boyhood club. While a considerable time has passed since his days at the club, the 23-year-old from Celbridge remembers his days at the club fondly.
“That’s my club, the one and only,” he explains. “I started playing for Lucan United when I was five years old, and I played for them until I was about 14. My dad was the manager, and he was involved in the committee.

“He’s not involved as much anymore, but he still has a little bit of a say. My brother plays with the senior team, the second senior team and the first team sometimes. We’re still very much a part of Lucan United.”

While growing up in Kildare, Masterson impressed in schoolboy football, earning himself a move to Anfield during his teenage years. “I loved every minute of my time at Lucan United,” he added. “We had a good team with a good few players on our team that went away as well. I
really enjoyed it. “Those were the days as they say, playing in the Kennedy Cup for the DDSL, the all-Irelands and the league games against St Kevin’s, Cherry Orchard, Malahide United and all those teams. It was a brilliant league and [I] really enjoyed it.”
When he turned 15, Masterson made the move across the Irish Sea to Liverpool for a reported fee of €1m to join the club who he grew up supporting at home.

“I went over at 15,” he explains. “I had a year in school [there] to do my GCSE’s and when I was 16 I was playing with them fully. I loved my time at Liverpool. Obviously, it was a great setup and a top team [to be at]. I had a great experience there as well.
“I can’t complain [about it] to be honest. I just needed to get out and play men’s football and just get more experience. That’s what I’m trying to do at the minute and hopefully it takes me back to where I was.”

While he never featured in the Liverpool first-team set-up on a regular basis, he still featured for the Reds in FA Cup games, and was also on the bench in their famous 3-0 win over Manchester City in the Champions League.

For someone like a Celbridge native in Conor to even be involved in that set-up, was something that will never forget.
“When I started going over it was just a special time of my career,” he said. “I loved it. I really did. [But] I have to go and play men’s football properly and I joined QPR [to do that]. I’m on loan at Cambridge, and that is something that I am really enjoying. Hopefully, I get a good few
games and then go back to QPR and push on.”

At Cambridge, the Celbridge native is playing his trade at the club with former Ireland international Wes Hoolahan. At 39, the Dubliner is still oozing class, with Masterson left in awe of his teammates technical ability.
“He’s a great guy and he’s a top player still a top player at 39,” he adds. “I don’t know how he does it, he’s brilliant. He helps us so much on the pitch with his experience. He is the link between everything. He’s a great person as well. He’s really down to earth and just great to
have around the club.”
Since departing Liverpool in 2019, Masterson has been craving a shot at regular first-team football. Chances have been few and far between for him at QPR, although. He looks like he is getting his opportunity to do that now, however, with Cambridge, and he is hopeful that he can use that as a springboard to force his way back into the international reckoning, with a potential reunion with Stephen Kenny on the cards.
“It’s the biggest honour playing for your country,” he said. “I loved every minute of it. It’s the camaraderie and the banter you have in the squad, it’s brilliant. I love playing for Ireland and obviously putting that green jersey on, there’s nothing like it. It’s the best thing you can do in football I think.
“I love Stephen, and I loved working with Stephen. He got the best out of me. The way he plays suits my style of football and I loved it. We had a great team at the time [with the 21s]. It broke up a little bit at the end because there were a few boys that went up to the first team and a few got injured.
“If we had the team all together [at the end], and Stephen was managing us, I think we would have got to the Euros and we would have done well in the Euros. Sometimes things aren’t meant to be, however.
“Stephen loves the game has a real passion for it and he loves his country. He has a real passion for his country as well. So hopefully he gets better results with the first team at the minute.”

For now, the North Kildare man is hoping that he can continue his return to form with Cambridge in League One and reach those heights he was once at.
“I came here just to show everyone that I can do it,” he concluded. “When you’re not playing week in week out people forget. Once you’re playing week in week out, you can show everybody what you can do.
“That’s what I’m trying to do at the minute and hopefully the international stage comes again. But my main focus at the moment is just playing for Cambridge doing well for them. We’ll see where it takes me.”