The following piece appears in this week’s Kildare Nationalist, in your shops now.

By Pat Costello
YOUR county needs you! No not as a player, supporter, club or county official. Your county needs you as a Referee. Do you have what it takes to become a Referee at Underage, Adult or at Intercounty level? The opportunity is there for you now! 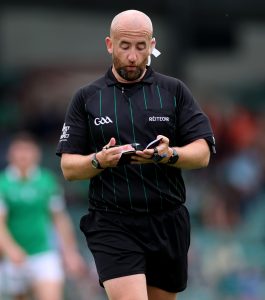 Ballyteague man, Noel McKenna,  is current Referees Coordinator in Kildare having taken over in May from a list of successful Referee Coordinators in the county from the long serving, Mick Fennin, to Martin Whyte and Declan Jacob.
Noel was on the Kildare Referees Panel for over 12 years himself during which time he refereed the County Final in 2011, Carbury and Athy, in 2014 the Sarsfields V Moorefield drawn game and the 2017 Final between Moorefield and Celbridge. McKenna was also part of the Leinster Referees Development Panel and the Croke Park Support Panel providing support at National League and Club Championship games.

From Bank Holiday Monday, 7 June, when Covid restrictions were lifted, approximately 2,000 matches have been covered from a panel that initially stood at 6o but because of Covid fears, some referee’s stepping away and retirements this is now down to 53
members.

“The Referees Panel covers all adult and Bord Na nÓg matches from U13 upwards,” Noel McKenna explains. “Tadhg Fennin and the GAA Coaches run the Go Games Referees Courses for grades U12’s and below. Camogie and LGFA would also draw on our panel for maybe 50/60% of their requirements.

Some of our referees cover all GAA codes in Kildare. On any given evening we could have 30/35 matches and over the past weekend we covered 20 championship matches at senior, junior and intermediate level with both referee’s and linemen.”

A big appeal and a recruitment drive underway through the clubs and through social media. Matches can’t happen without referees.
“At the moment a Foundation Referee Course is up and running online and we are actively seeking new referee’s. There are four modules to be completed before becoming a referee. Modules 1 and 2 are online.

Module 3 is conducted by a National Tutor appointed by Croke Park once classroom restrictions are lifted while Module 4 is the Rules Test. If you successfully pass all Modules and the Rules Test then you can start the transition into juvenile games and then on to the Referees Panel,” the Referees Coordinator adds.

“Refereeing gives you an insight to a different aspect of the GAA. Some people find it very rewarding. I myself got as far as matches in Croke Park. Brendan Cawley has almost reached the pinnacle and no doubt in years to come he will probably be the man in the middle following in the footsteps of great Kildare Referee’s like Bloody Sunday Referee, Mick Sammon, Peter Waters, Seamus Aldridge, Tommy Howard and Mick Monaghan.” McKenna continues.

“In addition, in a non hurling stronghold like Kildare, Conor Daly refereed a Leinster A Minor Hurling Final this year and Ray Kelly and Alan Lagrue has refereed All Ireland Camogie Finals. There is a pathway there for referees to move forward and currently there would be a number of current referee’s attached to the Leinster Development Panel in both football and Hurling”

Ray Kelly told us, “I have been fortunate enough to have refereed six or seven times in Croke Park. The adrenalin rush is always felt when you run out onto the pitch with the roar of the crowd; there is no better feeling when you are there as a Referee. It’s what we all aim for from your first Go Games right up to the very top. It’s the pinnacle of your career.  Every game should be treated the same
and with the same level of respect. I can’t recommend refereeing as a career highly enough.”

Noel McKenna sees refereeing as an opportunity for people who want to get involved in GAA games from any club in the county or for any players coming towards the end of their playing careers who still want to remain in the game. Its also a good way of keeping fit. A
special appeal is being made to the hurling fraternity in the county.

“Hurling is flourishing in the county so we need to boost our hurling referee levels especially in the north part of the county, our big population areas of Leixlip, Celbridge, Maynooth and those areas,” Noel McKenna tells us. Also we don’t have any female referees on our panel but would welcome females to come forward. Mags Farrelly in Cavan has led the way and has refereed in both
ladies and the men’s codes. There are no barriers there. We’ve had female participants on the courses in the past but just they slipped away over time.”

Once you are a fully paid up member of a club, obtain your Garda Vetting through your Club’s Child Welfare Officer then you can begin the Referees Foundation Course.“ Some referee’s have covered over 70 /80 matches over the last few months . We’ve a small panel and
we’ve put those lads under a lot of pressure to ensure these games have gone ahead. Unfortunately a handful of matches could not gone ahead due to a lack of a referee. The referee’s on the current panel have being willing and able and only for them we would be in a bigger quandary,” McKenna says.

“I’d like to take this opportunity to thank them for their commitment and flexibility. Referee’s are an integral part of ensuring our games are played so I’m appealing for anyone out there who is interested in taking up the whistle, to go online to http://www.gaa.ie/my-gaa/match-officials/become-a-match-official or to contact me on [email protected] and I’d be only too happy to discuss the Foundation Course with them.” Noel McKenna concludes.