THE Redevelopment of St Conleth’s Park will commence in Quarter 2 of 2022, a Special Meeting of Kildare Co Board, held virtually, was told on Tuesday night. Whether this will be April, May or June of next year wasn’t confirmed. 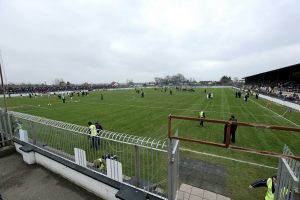 St Conleth’s as we know it. Now set for redevelopment in 2022. Photo: INPHO/Morgan Treacy

Padraig McManus, who chairs the St Conleth’s Development Committee, gave a presentation to club delegates which outlined costs, funding arrangements and the proposed start date with a projected completion  date pushed out from 12 months to 18 months.

The current project, which was first discussed in 2017, has moved along over the last few years but was given a boost when it was included for special government funding in 2019 along with Páirc Táilteann in Navan and Walsh Park in Waterford.

The original budget for the project was €10.5m, rising to €11.2m because of inflation and other issues with a final Quantity Surveyor costing coming in at €11.6m.  Funding of €4.85m has been secured from Government with a further €1.5m ringfenced for the project by the Co Board over the last few years and remains in tact despite the challenges of such as Covid in the period.

Further funding will come from Croke Park and through a bank arrangement, Mr McManus informed the club delegates.

Price and delivery of precast concrete are indeterminables at the moment but Mr McManus told the meeting that this has been taken into account and that the intention is to go to tender for the project in the coming weeks with a contractor in place within months. Work will not commence until the delivery of the precast structure for the Main Stand is guaranteed.

The start date for the redevelopment will allow for the home Allianz League games to be played in the current stadium in 2022 but club games for 2022 as well as county and club games for 2023 will have to find a new home.