THE strength of Kildare soccer has been well documented at male level over the last while with the inclusion of players in the Republic of Ireland squads at senior, U21, U17 and U17 level, not to mention the performance of Maynooth University Town in the Extra.ie FAI Cup. 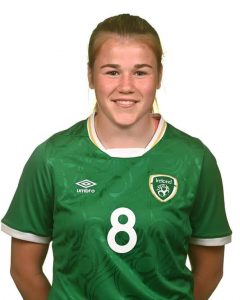 Orlaith O’Mahony included in the Republic of Ireland Women’s U17 Squad along with Claudia Keenan, for the UEFA Qualifiers in Norway

Hot on the heels of all of that comes the news that two Kildare players have been included in The Republic of Ireland Women’s U17 Squad which has been confirmed for their 2021/22 UEFA Women’s U17 European Championship Qualifying Round games in Norway next month.

Monasterevin born, Claudia Keenan, who plays in goals for Peamount United, and midfielder Orlaith O’Mahony (Shamrock Rovers), the St Farnan’s Prosperous student, who recently captained the Irish U16’s against England, have both been included by Head Coach, James Scott, in  a strong roster of players for the qualifiers with eight different EA SPORTS Women’s Underage League clubs represented for three games in Norway.

They will kick off against Hungary on Saturday, 9 October followed closely by Bulgaria on Tuesday, 12 October, before finishing against host nation Norway on Friday, 15 October.

Scott’s aim is to guide his squad out of this phase into next year’s Elite Round before attempting to book a place at next summer’s finals tournament in Bosnia & Herzegovina.